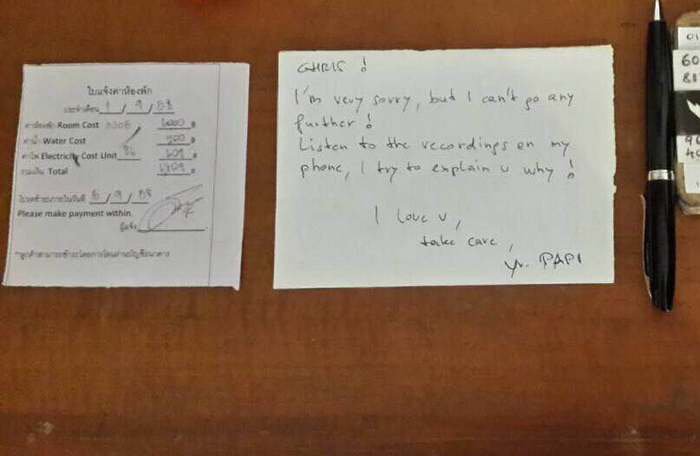 PHUKET: An Austrian expat, allegedly suffering from gambling issues and a drinking problem, took his own life yesterday morning after failing to have enough money to extend his visa in Thailand, a voice message left by the man explained.

Walter Edhofer, 53, was found by neighbors at about 7am in a parking lot in Kathu, confirmed Lt Sawanya Eiadtrong of the Thung Thong Police.

“Mr Edhofer’s son, Chris, translated the voice message that his father left him. In it, Mr Edhofer explained that he was unemployed and in debt,” Lt Sawanya said.

Mr Edhofer, who had been working in the tourism industry, became a heavy drinker and developed a gambling problem following his divorce, Chris told police.

Officers found no sign of a struggle at the scene, and believe that Mr Edhofer had died at least three to five hours before being discovered.

“There were five empty beer bottles in the parking lot with him. We checked the body and found a note saying ‘Please call my son Chris’ with a phone number on it,” Lt Sawanya said.

Police then searched Mr Edhoffer’s apartment and found his monthly bills and a note left for his son.

The note instructed Mr Edhofer’s son, Chris, to listen to a voice recording on his phone explaining his death.

“Even prior to having the message translated, we suspected that his death may have had to do with financial issues, as he had not paid rent in two months and was allegedly in debt to people in the neighborhood,” said Lt Sawanya.