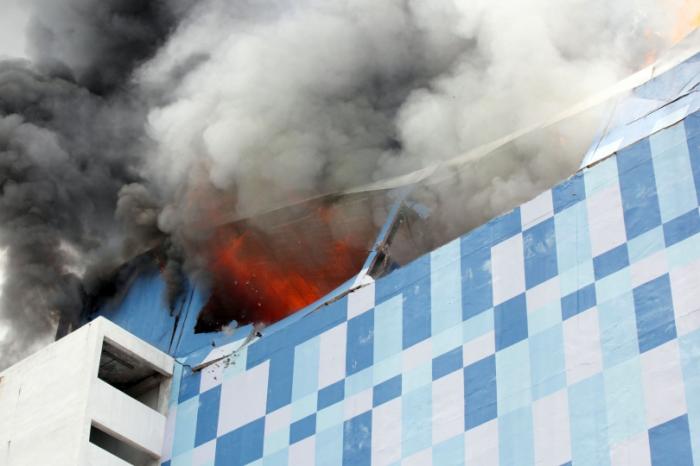 BANGKOK: The fire at Major Cineplex Pinklao that caused part of Central Festival to collapse yesterday afternoon is being probed by investigators.

Metropolitan Police chief Sanit Mahathavorn said an investigation team in cooperation with the local District Office is looking into the cause of the fire and the structural integrity of the building.

The fire broke out in a theater on the fourth floor and spread quickly due to the environment of flammable materials. A total of 7 theaters were engulfed in flames, which caused part of the roof to collapse. It took fire-fighters 15 trucks and over an hour to extinguish the blaze (story here).

According to police, the fire broke out in the seventh theater on the fourth floor of the Cineplex shortly before noon and spread fast because of the presence of flammable materials. The fire then engulfed seven of the cinema’s 13 theaters, causing a part of the four-storey structure to collapse. It took the firemen more than an hour to put out the flames.

“Only the old part of the cinema and the back of the building collapsed,” said Col Sanit, adding that investigators had not ruled out arson.

Bangkok Governor MR Sukhumbhand Paribatra also visited the site to inspect operations. He said the Bangkok Metropolitan Administration’s engineering team was going to check the building’s structure. He warned of harsh punishments if the complex had been illegally modified, and promised to look into it.