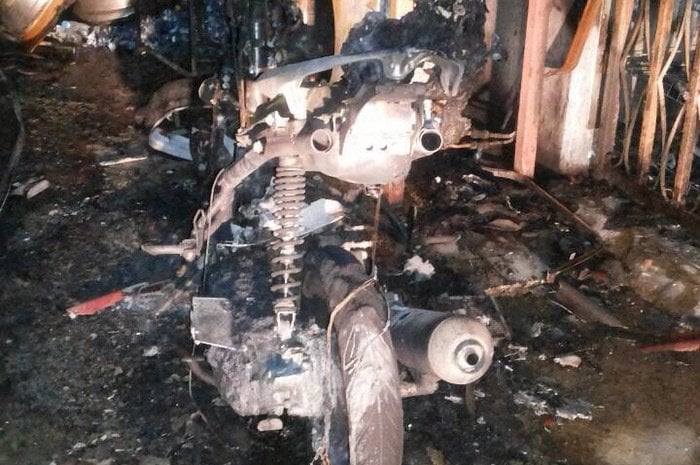 PHUKET: Police are investigating whether a power transformer sparked a blaze in Thung Thong late last night in which the front of a house was set afire, with a car and a motorbike damaged, and another motorbike completely destroyed.

Firefighters were called to the scene, in the Irawadee housing estate, at about 11:50pm. They took about 30 minutes to douse the flames.

Sunee Khamwijit, 30, told police that she had returned home at about 7pm.

Her housemate, Yossaya Thingdeeying, 40, came home later and then left her car parked in front of the house and went to work at a hotel in Patong, she said.

“At about 11:30pm, I heard the sound of breaking glass and smelled something burning,” she told Thung Thong Police Superintendent Chaowalit Petsripia, who inspected the scene personally.

“I ran out of the house and saw my motorcycle on fire. I called for help. Neighbors came, but we couldn’t stop the blaze, so we called the police for help.”

The front of the house was scorched, and a second motorbike, belonging to Yossaya, sustained damage.

“The windscreen of the car [in front of the house] was also damaged, and there were scorch marks on the car’s roof,” Col Chaowalit noted.

“However, as there are also burn marks on the transformer on the power pole in front of the house, we have called in experts to investigate the real cause of fire.”