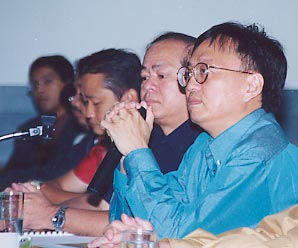 PHUKET: Senator Suradech Yasawas, chairman of the Senate Committee for Tourism, and committee member Senator Paiboon Upatising of Phuket yesterday openly criticized the lack of government support for long-stay tourism, especially health-related tourism. Senators Suradech and Paiboon, along with 10 other committee members, arrived in Phuket yesterday for a two-day inspection tour of the island’s international-standard medical centers, to evaluate their role in attracting long-stay tourists. Speaking at the Bangkok Phuket Hospital, Sen Suradech said, “Phuket has had long-stay [foreigners] for a long time, without government support. The [national] government should support ‘health trips’ and allocate funds to developing health care facilities.” Sen Paiboon said, “The government has lost its way in [working out] how to support long-stay tourism. Right now, the long-stay industry is about 30% government and 70% private companies, which work for their own benefit. “The committee is considering how the government can become more involved with long-stay tourism,” Sen Paiboon said, noting that “medical care is one area that could do with improvement.” Suraphong Lukhanumarnjao, director of the Bangkok Phuket Hospital, said that, without government support, hospitals in Phuket had already developed many programs to attract tourists for long-stay “health trips”. These include rehabilitation centers, he said, and services such as traditional Thai massage, acupuncture, Thai herbal therapy and cosmetic surgery. He identified current Immigration procedures as one of many areas that require reform in order to help the industry. “Immigration procedures frustrate many people wanting to come here for long stays,” he said. He also suggested that Bangkok initiate a government-to-government medical insurance reimbursement scheme.

Storms on the way – weatherman