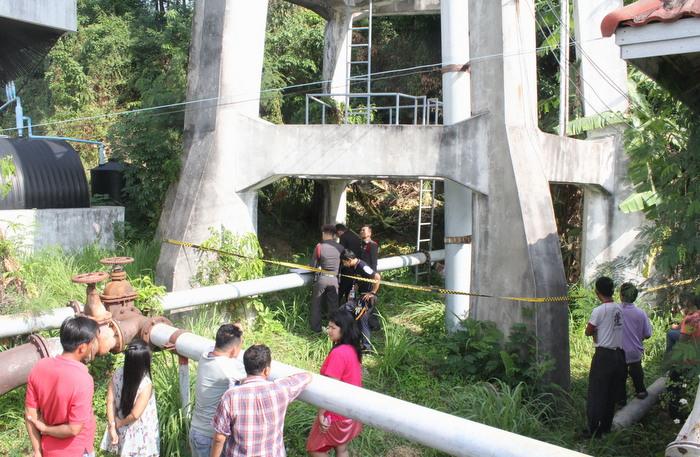 PHUKET: The family of a man, whose body was found under a Phuket City Municipality water tower this morning, is urging police not to rule out foul play.

The body of Sompong Vijit, 30, was discovered by a municipality staffer who was walking by the area.

“Yesterday evening, Mr Sompong went out to collect cans and bottles for recycling. When he didn’t return by 10pm, his relatives went out looking for him, but couldn’t find him,” said Maj Somchai Nooboon of the Phuket City Police.

“His family members were very suspicious to begin with, as Mr Sompong always let them know where he went and was also recently having issues with a group of local teenagers.”

Police believe that Mr Sompong had been dead for six hours before his body was discovered.

“So far, the evidence leads us to believe that Mr Sompong may have fallen from the tower, as one of his shoes was found at the top and the other at the base,” Maj Somchai said. “He suffered fatal head and abdominal injuries, which are consistent with a fall.”

However, police say they have yet to rule out foul play and will continue to investigate all leads.

Mr Sompong’s body was taken to Vachira Phuket Hospital to determine the cause of death.