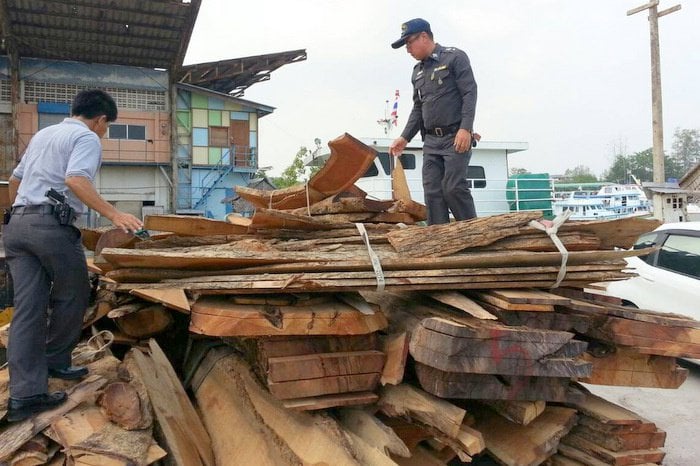 PHUKET: Marine Police on Friday seized a truckload of rough-cut planks of wood hewn from protected trees that were bound for Phi Phi Island, where they were to be used to build a restaurant.

The truck, bearing Chachoengsao license plates and driven by Janyarat Janput, 34, was stopped near Jianwanich pier in Rassada near Phuket Town during a random check by police, Lt Col Panya Chaichana of the Phuket Marine Police announced yesterday.

“The driver was unable to present to police his permits to transport the wood, so the officers called in experts from the Ministry Natural Resources and Environment [MNRE] Phuket office,” he said.

“The MNRE officials confirmed that in the back of the truck were 79 rough-cut planks of Mai Pradoo [Pterocarpus indicus] and 50 planks of Mai Daeng. Both of these species of trees are protected by law.”

Truck driver Mr Janyarat told police that he had no idea that the planks were cut from protected trees.

“I have no idea what type of wood it is or what documents I am supposed to have,” he said.

Mr Janyarat presented to police the six documents he was given in order to deliver the wood, but the officers present quickly confirmed that the papers only represented permission to operate logging on private land.

While police were inspecting the truck, Visut Pattamapaniwong, 45, from Phuket, arrived and explained that he owned the wood.

“I ordered it from Teerayu Yangsabai, 48, from Ratchaburi, in order to build a restaurant on Phi Phi Island,” he said.

“However, the MNRE officers confirmed that those permits do not provide for transporting this wood,” Col Panya said.

The officers seized the haul of lumber and the truck, he confirmed.

“Mr Visut has until 11am on Friday to present to us his permit to transport the wood. If he fails to do so, we will charge him for transporting protected wood without permission.”

No further safety measures at shooting range after tourist kills self