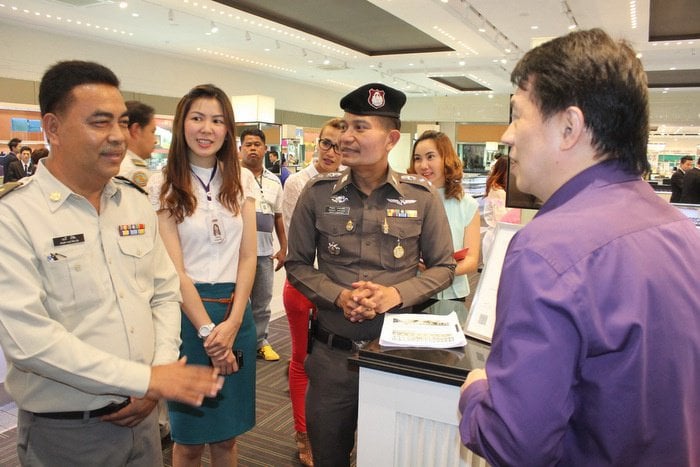 PHUKET: All people in Phuket trading in ivory have until April 21 to register with the Department of National Parks Wildlife and Plant Conservation (DNP) or face legal action, police warned yesterday.

The deadline was delivered by Phuket Provincial Police Deputy Commander Peerayuth Karajedee at an inspection of the Royal Paragon Phuket store in Chalong.

“Several stores in Phuket sell ivory, and this store was chosen at random,” said Col Peeryauth, adding that the store was fully compliant with legal requirements to sell ivory.

“Shop owners must register with local offices of the DNP, such as the Khao Phra Thaeo Wildlife Sanctuary center in Thalang.

“After the DNP has the shop’s details, traders must register with the Phuket office of the Department of Business Development (DBD).

“Alternatively, traders can register with their local municipality, which the DBD has empowered to receive registrations on their behalf.”

The inspection yesterday was one of many synchronized raids conducted throughout 11 provinces, with Phuket being the only province in the South where a shop was raided, Col Peerayuth explained

“The project was organized under the order of Royal Thai Police to show that Thailand follows the policies of the Convention on International Trade in Endangered Species of Wild Fauna and Flora [CITES], and that we are taking action on it,” he said.

The Royal Thai Police will submit their annual nationwide report on progress made in the fight against the illegal ivory trade to CITES Secretariat in Geneva on March 31, he added.

This latest campaign began in earnest on Thursday after police announced the arrest of a Malaysian national Teo Boon Ching, 51, for allegedly being behind an international illegal ivory trade network.

The ivory was valued at about 5.8 million baht, reported Reuters.

Police said Mr Teo, who was arrested alongside his Thai partner Sirichai Sridanont, 50, was accused of trading and smuggling African ivory through Thailand’s southern border with Malaysia.

As part of the government’s push to eradicate the illegal ivory trade in Thailand, the National Legislative Assembly in November passed a bill levying harsher punishments for perpetrators of the ivory trade and those involved in the export, import and trafficking of ivory goods.

Those committing such crimes now face a prison term of up to three years and/or a fine of up to 6 million baht, as opposed to the previous punishment of a one-year jail term and/or a 2-million-baht fine (story here).

That same month, the Tourism Authority of Thailand (TAT) posted a warning to travellers on its website, urging tourists not to take ivory out of the country.

“Ivory from domesticated elephants can be legally traded, but allowed only for domestic consumption under trade control,” the notice explained (read here).

“Thailand prohibits import and export of ivory even if it is for personal consumption or as souvenir, and tourists are strongly advised not to buy ivory or ivory products.

“Taking ivory or ivory products outside Thailand is illegal. Offenders could get a jail term of up to 10 years or a fine of up to four times the value of the item or both penalties, and could face arrest at their country of origin.”