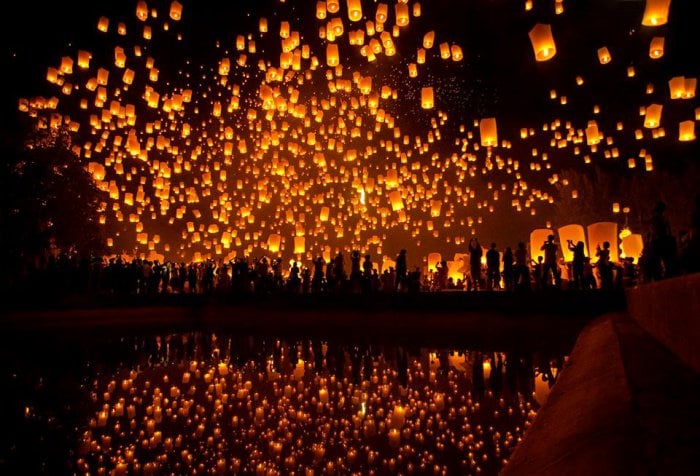 PHUKET: Police have ramped up their campaign against fireworks and khom loi, the traditional “floating sky lanterns” used in celebrations throughout Thailand, in an effort to stop them being launched on Patong Beach.

The campaign began in earnest on Thursday night, when officers arrested vendor Chaichana Khuepkrathok, 38, at his house in Patong for selling floating lanterns on public land – that is, on Patong Beach – without a license.

“These lanterns can be dangerous and set other people’s property on fire,” Lt Col Pongpichan Chayanonpiriya of the Patong Police station told the Phuket Gazette.

“That’s why we are targeting this problem, but as there are no laws specifically prohibiting people from buying and launching khom loi, we have started by targeting the vendors.”

Mr Chaichana was charged under Section 41 of the Public Health Act 1992, which incurs a maximum fine of 2,000 baht.

“This [fine] is very low, and this is why [vendors] keep selling the lanterns,” Col Pongpichan said.

“They are never afraid of paying 2,000 baht, because they can earn more than 10,000 baht a day during special events, such as new year.”

“Selling fireworks requires a permit, and vendors need a permit to sell them on public land, so that part we can easily enforce,” he said.

However, regarding the iconic khom loi, Col Pongpichan said that he would have his officers speak with tourists on the beach who are preparing to launch their lanterns, often regarded and touted as a quintessential part of a holiday experience in Thailand.

“We cannot stop them because there are no laws against launching khom loi, but we can point out that if the lantern burns other people’s property, the person who sets the lantern alight will be in charged,” Col Pongpichan said.

“If we can encourage tourists not to launch khom loi on Patong Beach, then the vendors will have no one to sell them to.”