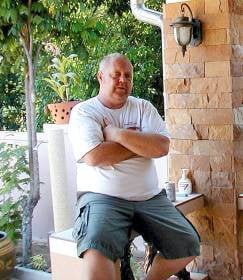 RAWAI: Police say they have suspects in mind but are collecting more evidence to submit to Phuket Provincial Court when they apply for arrest warrants in the case of Norwegian Simen Sparre Knudsen, who was stabbed to death on September 23.

Mr Knudsen, 47, was stabbed and left for dead on the road from the Kata Viewpoint to Rawai at about 1 am on September 23.

He later died at Phuket International Hospital, where an autopsy revealed he suffered two stab wounds: one to the ribs on the left side of his torso and another to the heart.

Chalong Police Superintendent Col Chalit Kaewyarat identified the victim as Simen Sparre Knudsen, a Norwegian who had lived in Phuket for more than 20 years.

The day after the murder, Col Chalit said that two men had attacked Mr Knudsen on a dark section of the road.

A resident of Rawai Village 7, where he lived with his wife Sommaai Knudsen, 39, and their 13-year-old son Chanon, Mr Knudsen was on his way home by motorbike after a night of socializing when the attack occurred, said Col Chalit.

Col Chalit initially said he thought a personal dispute was the likely motivation behind the attack because Knudsen’s motorcycle and other belongings were left untouched.

However, the victim’s wife insisted that two cell phones, credit cards and an unspecified amount of cash were missing from a hip bag her late husband always wore when he went out.

K. Sommaai said she was unaware of any personal disputes that may have motivated the attack as her husband had never been involved in any businesses in Thailand.

“He was a good guy and never got into fights with anyone before. In 13 years since I’ve known him I never heard about him fighting. I don’t believe this was local teenagers fighting with him, but it is possible that he was robbed,” said K. Sommaai.

Mr Knudsen called his wife by mobile phone at about 6:30 pm that evening to say he was going out to to meet friends at the Boon Bar in Kata, she said.

He said he would not be late returning home because he had to prepare to leave for Norway on Monday to work a two-month stint.

Mr Knudsen, who normally worked for two months and then had a two-month break, had been traveling between Thailand and Norway in this fashion for 30-years, she said.

That night, K. Sommaai suggested Mr Knudsen wait for her and their son to return home so he could use the car, but he opted to go by motorbike, she said.

Two suspects had followed Mr. Knudsen on a motorbike before the attack, said Col Chalit on the day after the murder. He later confirmed that an image of one suspect had been sketched, but declined to release it to the media for fear of jeopardizing the investigation.

Phuket Provincial Police Deputy Commander Pol Col Paween Pongsirin had already visited Chalong Police Station to check on the progress of the investigation. Tourist safety has been in the spotlight in Phuket since the crash of One-Two-Go flight OG269 on September 16.

The Gazette called Norwegian Consul in Bangkok Bridgit Branthenberg, who confirmed only that Mr Knudsen’s family in Norway had been notified.

All of the information released by the consulate was included in a report by Norwegian journal Aftenpost, she said.

Norwegian readers of the Gazette kindly translated reports of those accounts, which stated that Mr Knudsen had been employed as a merchant marine captain by Hoegh Fleet Services, a Norwegian firm specializing in sea transport of liquid natural gas. He was a native of the town of Vestfold in Nottoroy County, it was reported.

Mr. Knudsen was rushed to hospital by a German bar owner named Stefan, whose Icon Bar is close to the scene.

He was made aware of the stabbing when a woman ran into the bar screaming. Stefan raced to the scene by motorcycle, called an ambulance and kept Mr Knudsen alive by mouth-to-mouth until it arrived.

The victim’s brother Even and other family members, together with his employer, are assisting the wife and son.

A Buddhist funeral ceremony for Mr Knudsen will be held at Wat Chalong, where his remains are to be cremated September 29.