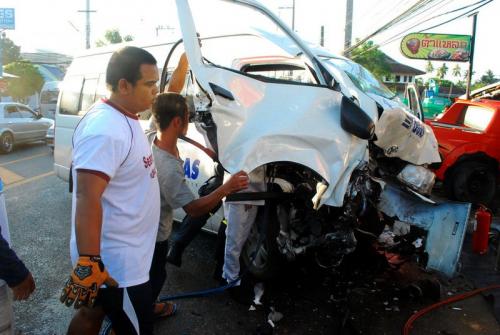 PHUKET: Police confirmed this week that they have charged the “real driver” of the Phuket tour van involved in the accident on November 29 that claimed the life of 9-year-old schoolgirl Kunnarree Lattuada-Lancini (story here).

“Makeesan Samae has been charged with gross negligence causing death under Section 290 of the Criminal Code and with reckless driving under Section 43 of the Land Traffic Act BE 2522,” Sub Lt Kraisorn Boonprasop of the Chalong Police told the Phuket Gazette.

Section 290 of the Criminal Code states: Whoever causes death to another person by inflicting injury upon the body of such person without intent to cause death shall be punished with imprisonment of three to fifteen years.

Section 43 of the Land Traffic Act states: No driver shall drive a vehicle with such carelessness and recklessness that it may cause danger to persons or property. Any person found guilty of contravening Section 43 shall be fined a maximum of 1,000 baht.

Sub Lt Kraisorn explained that he was originally informed that Makeesan’s older brother, Tuan Russala Samae, was the driver of the vehicle at the time of the head-on crash (story here).

“However, as I carried out my investigation I learned that Tuan Russala was in the front passenger seat when the accident happened,” Sub Lt Kraisorn said.

“Makeesan has reported himself to the police and acknowledged the charges against him. He is now recovering at home, awaiting trial,” he said.

Sub Lt Kraisorn said the case had yet to be transferred to the Public Prosecutor.

“We are now waiting for the forensic report of the accident to be attached to the case file so we can transfer it to the public prosecutor for further action,” Sub Lt Kraisorn said.

“I do not know how long it will take to receive the accident report from the Phuket office of the Forensic Police, but I will pass the case to the public prosecutor as soon as possible,” he added.