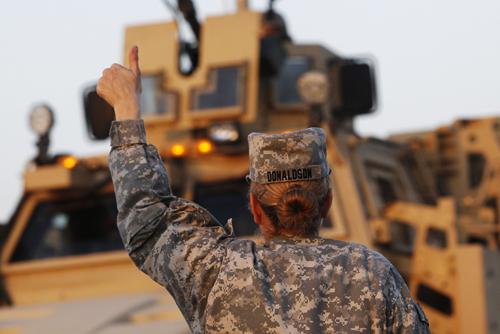 PHUKET: The U.S. military will formally end its ban on women serving in frontline combat roles, officials said yesterday, in a move that could open thousands of fighting jobs to female service members for the first time.

The move knocks down another societal barrier in the U.S. armed forces, after the Pentagon in 2011 scrapped its “Don’t Ask, Don’t Tell” ban on gays and lesbians serving openly in the military.

U.S. defence officials said the decision to end the ban had been taken by outgoing U.S. Defence Secretary Leon Panetta and individual military services would have until 2016 to seek exemptions if they believed any combat roles should remain closed to women.

Panetta is expected to announce the decision formally on Thursday. It will come after 11 years of non-stop war that has seen 84 women killed as a result of hostile action in the unpopular, costly wars in Iraq and Afghanistan.

The military services will have until May 15 to submit a plan on how they will comply by 2016.

Women have represented around 2 percent of the casualties of in Iraq and Afghanistan and some 12 percent – or 300,000 – of those deployed in the war efforts in the past 11 years, in which there were often no clearly defined front lines, and where deadly guerrilla tactics have included roadside bombs that kill and maim indiscriminately.

“This is an historic step for equality and for recognizing the role women have, and will continue to play, in the defence of our nation,” said Democratic Senator Patty Murray from Washington, the outgoing head of the Senate Veterans Affairs Committee.

The planned move was also welcomed by Democratic Senator Carl Levin of Michigan, head of the Senate Armed Services Committee, who said it reflected the “reality of 21st century military operations.”

The American Civil Liberties Union, which filed a suit in November seeking to force the Pentagon to end the ban, applauded the move, which overturns a 1994 policy preventing women from serving in small front-line combat units.

Florence Cassez, 38, was serving a 60-year sentence that opened up a rift between France and Mexico after she was arrested in 2005 at a ranch near Mexico City with her former boyfriend, who led a kidnapping gang called the Zodiacs.

Supreme Court Judge Jorge Pardo ordered her immediate release during a televised court session, which at one point looked to be going against her.

Cassez was still in prison, though her lawyers said they hoped she would be heading home to France late last night.

“It’s not far from being the best day of my life. We’ve been waiting for so long. She deserves it. She is innocent and has fought to prove that. It’s a victory for her.”

After the arrest, police made Cassez take part in a staged scene of officers freeing kidnap victims. She was portrayed as a kidnapper in the re-enacted event, which was aired on national television. Police subsequently admitted wrongdoing.

A judge sentenced her in 2008 following a closed-door trial with no jury, typical of most cases in Mexico. A majority of the Supreme Court judges agreed.

Her lawyers had said Cassez’s rights were violated and that evidence against her should be thrown out.

“It’s over. I will go and collect Florence at the prison now. I am collecting a woman that I have been dreaming of collecting from a horrible prison for the last seven years,” said Frank Berton, Cassez’s lawyer.

In March, Mexico’s Supreme Court rejected a bid to release Cassez immediately but opened the door to a review yesterday, which had initially been intended to discuss a motion to throw out some of the evidence used to convict her.

PHUKET: India needs to implement existing laws, not introduce tougher punishment such as the death penalty, to prevent rape, a government panel set up to review legislation said yesterday, following a brutal gang rape that shook the nation.

Panel head, justice J.S. Verma, rejected outright the idea of the death penalty for rape cases, a demand from some protesters and politicians in the days after the 23-year-old physiotherapy student was attacked on a moving bus.

“There was an overwhelming opinion against the death penalty, even women’s groups opposed this,” Verma told a news conference. This recommendation was in line with the opinions of rights organisations concerned harsh new laws would not solve the rising number of reported sexual assault cases in India.

Prime Minister Manmohan Singh asked Verma to look at possible amendments of criminal law in response to public anger after the rape and subsequent death of the student, who was assaulted with metal bars and dumped bleeding on a highway.

In that case, because the woman died of her injuries, the five accused have been charged with murder and face the death penalty if found guilty. The victim died of massive organ damage in a Singapore hospital two weeks after the attack.

Hearings in the case against the accused begin in a fast track sessions court today. The court must decide which of the prosecution’s charges it will hear before a trial formally begins.

Separately, the Supreme Court is hearing a petition to move the case out of Delhi, after one of the accused said strong public opinion in the city would prejudice the case.

Verma said he was shocked to hear top government officials congratulate the Delhi police chief’s handling of the case, when, he said, police negligence was to blame for a climate of insecurity in New Delhi, known as India’s “rape capital.”

“Practically every serious breach of the rule of law can be traced to the failure of performance by the persons responsible for its implementation,” the recommendations submitted to the government by Verma on Wednesday stated.

The report said the failure of public functionaries responsible for traffic regulation and law and order enabled the Delhi gang rape, and said the case had revealed “officials’ low and skewed priority of dealing with complaints of sexual assault”.

He also rejected lowering the age juveniles can be tried as adults, a demand from some politicians and protesters. A sixth accused in the case has told police he is under 18, meaning he would face a maximum three year sentence if found guilty.

The panel did recommend other milder forms of sexual harassment be more strictly legislated against and punished.

“Sexual assault degenerates to its gravest form of rape beginning with uncontrolled sexual harassment in milder forms, which remain uncontrolled. It has, therefore to be curbed at the initial stage.”

World News: Indian women learning to look after themselves