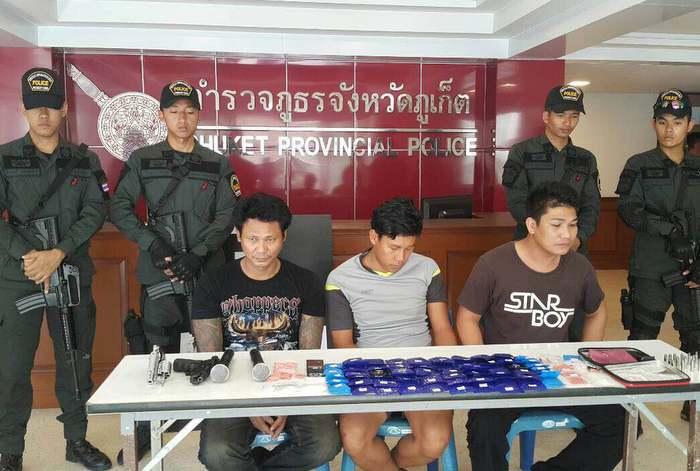 PHUKET: Police arrested two key members of a major drug-dealing ring run by an inmate at Yala prison, after the pair confessed to their roles in moving about 5 million baht worth of ya ba (methamphetamine) from Chiang Rai to Southern Thailand.

“This is one of the largest ya ba drug busts that we have been a part of,” Phuket Provincial Police Deputy Commander Pinit Sirichai said at a press conference yesterday.

During the raids police seized two handguns with matching ammunition, about 116 grams of ya ice (crystal methamphetamine) and about 14,000 ya ba pills.

“All three were charged with possession of a Category 1 drug with intent to sell. Mr Thanwa and Mr Sorla were also charged for the illegal possession of a firearm,” said Col Pinit.

“Mr Bamrung and Mr Sorla confessed that they had been hired to pick up 100,000 ya ba pills from a hilltribe man named ‘Mr Moo’ in Chiang Rai. The final destination was Southern Thailand,” said Col Pinit.

“According to the suspects, the man behind the deal is Yala Provincial Prison inmate Uttsaman Jintra, who allegedly placed the order with Mr Moo. Mr Bamroong was the drug runner, while Mr Sorla was supposed to receive the drugs and divide it up into smaller shipments for buyers,” explained Col Pinit.

“Mr Bamroong said that he was hired to transport the drugs for 800,000 baht and went to Chiang Rai with his two friends. One of the friends was held as collateral until the drugs were safely delivered.”

However, when Mr Sorla received the drugs in Songkla, he refused to pay Mr Bamroong in cash. Instead he gave him 10,000 ya ba pills and ordered the release of Mr Bamroong’s friend, Col Pinit said.

“We will continue to look for any other drug deals connected to this network as we broaden our investigation and make more arrests,” he said.