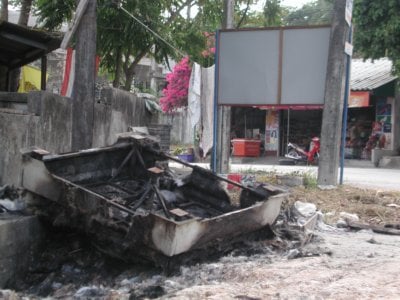 RASSADA: A “temporary” police box installed at the entrance to Pahin Namsai Village, located off Ruam Pattana Rd, has turned out to be very temporary indeed. It was burned to the ground by persons unknown at about 4:30 am on Monday – just one week after it was installed.

Lt Col Adul Niraphai, Duty Inspector at Phuket City Police Station, told the Gazette that construction of the box was financed by a local man identified only as “K. Opas”.

Fearing for his safety, K. Opas had asked for better police protection following a dispute with other residents of the housing estate.

After questioning K. Opas and other local residents, police believe the arson attack was carried out by K. Opas’ adversaries as an act of intimidation, Col Adul said.

However, no arrests have been made as there were no eyewitnesses, he added.