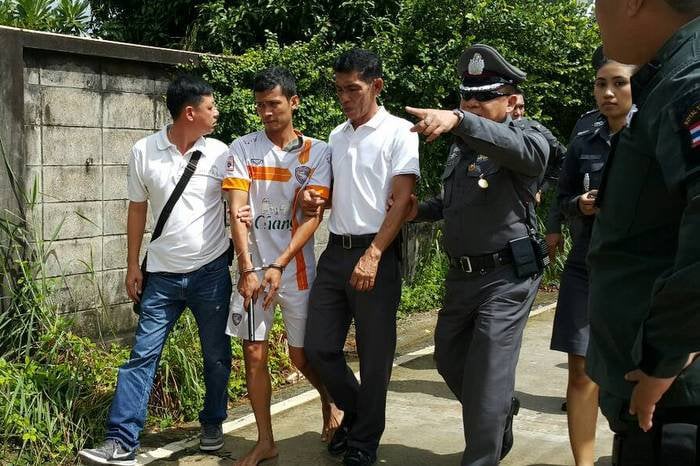 PHUKET: Police have arrested one of two suspects for the murder of the SuperCheap Soi Paniang branch manager yesterday.

Nattapon Nukoon, 26, was stabbed to death in front of his house in Soi Paniang 3 half past midnight yesterday, said Phuket City Police Superintendent Col Kraithong Chanthongbai.

“There was a knife stuck inside his right ear with his right arm also stabbed, and he was lying in a pool of blood in front of the house. His Yamaha Nuvo bike was found nearby,” Col Kraithong said.

“We also found a foot-long metal rod in nearby bushes which we assume was another weapon used by the killer.”

“According to eyewitnesses, Mr Nattapon always returned to his girlfriend’s house after work. This time, however, when he arrived in front of the house, a man leaped out of the nearby bushes and attacked him. Mr Nattapon tried to flee, but another suspect blocked his way,” Col Kraithong said.

Mr Nattapon fell off his bike, and was beaten and stabbed. The two suspects then fled.

Police quickly identified one of the suspects as Ong-art MeeKaew, 29, after viewing CCTV footage, collecting evidence and questioning eyewitnesses.

“Upon getting an arrest warrant, we went to his house on Wichitsongkram Road at 5:30 pm. He was arrested and we also took a long-sleeve black shirt, black jeans with blood stains on it, shoes, a helmet and a Honda Wave bike as evidence of what he wore and used during the killing,” Col Kraithong said.

Mr Ong-art confessed that he, together with 24-year-old Nattapong ‘Mai’ Thongsirthong, killed Mr Nattapon. He told police he was the one who blocked Mr Nattapon’s way, and Mr Nattapong was the stabber.

“Mr Nattapong worked under Mr Nattapon. He was transferred to another branch but refused to go and was finally fired,” Col Kraithong said.

Mr Ong-art was charged with murder with intent and is being held at Phuket City Police Station.

Police are searching for Mr Nattapong.