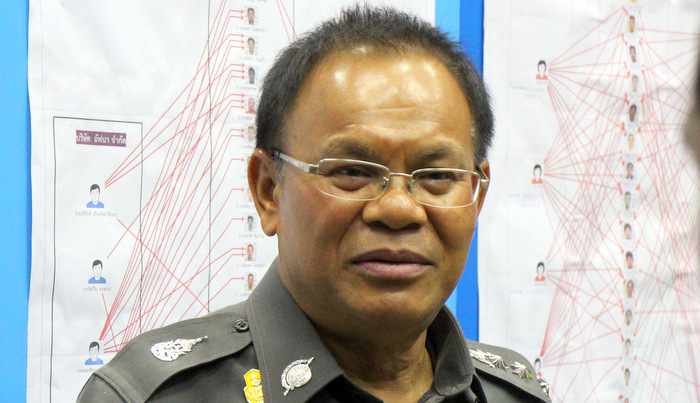 PHUKET: As part of an ongoing campaign to clean Phuket of all people deemed by police to be a threat to the island’s tourism industry, officers have arrested three people for involvement in major street blockades.

Police have arrest warrants for 23 people for their roles in the blockades, Lt Gen Panya Mamen, Commander of the Royal Thai Police Region 8 division, announced yesterday.

Three of them have presented themselves to police.

Chakkapong Limsakul, 40, was taken into custody for his role in the March 4 blockade in Patong, during which 200 tuk-tuk drivers blocked all roads into the resort town. The blockade ended with Phuket’s police commander agreeing to the drivers’ demands, which included transferring the Patong Police superintendent (story here).

“Arrest warrants have been issued for 10 suspects for the Patong blockade,” Gen Panya said. “One of the suspects has surrendered himself. Police are questioning him for more information.”

Somsak Pasarnphan, 41, one of the 10 suspects wanted for the April 24 blockade of Thepkrasattri Road in Mak Prok, Thalang, surrendered himself to Tah Chat Chai Police at about 3pm yesterday, but denied any involvement in the blockade.

“That day I dropped off a customer at a hotel in Mai Khao. On the way home, I saw the blockade and had no idea what was going on,” he said.

“Somebody pointed for me to pull over my car. I was there just looking at what was happening.”

The blockade, staged by angry villagers over the handling of the investigation into the rape of a five-month-pregnant local woman (story here), saw thousands of people caught in Phuket’s biggest traffic jam on record.

The third suspect to voluntarily hand himself over to police was Sirichai Saengprichakul, 42.

Mr Sirichai was wanted for his involvement in the blockade at “100 bodies curve” on Chao Fa West Road, in Wichit, in April (story here).

“We are questioning him and arrest warrants will be issued today for two more suspects for this blockade,” Gen Panya noted.

“I am sorry about that. I will not do it again.” he said.

Mr Sirichai explained that the blockade was staged to stop people from dying at the lethal curve.

“That curve was very dangerous. A lot of people have been killed there,” Mr Sirichai said. “We blocked the road to get attention from authorities. I did not expect to be arrested for it.”

The blockade was staged after villagers complained that local authorities had for years done nothing to improve safety at the lethal curve.

The blockade dispersed after Governor Maitri acquiesced to the villagers’ demands, which included temporary safety measures installed on the notorious bend in the following days.

However, despite the safety measures, two people were killed at the curve by a truck that slid out of control in the rain just one week later (story here).

“Blockades cause a great deal of harm to Phuket as a tourist attraction. After the Mak Prok blockade, both Thais and foreigners were afraid of another street protest. A lot of people were in trouble as they were caught in the blockade and could not reach the airport,” he said.

“We cannot let this happen again. Whoever causes problems must be prosecuted.”