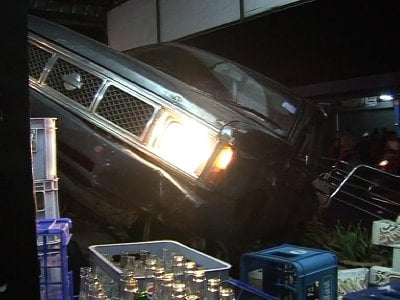 At about 10pm, Phuket City Police were informed of an accident at the River Beer Garden on Pracha Uthit 1 Road, which runs parallel to the bypass road in Rassada subdistrict.

Police led by duty officer Anek Mongkol raced to the scene, where they found a brown Nissan pickup slammed into the front of the busy restaurant.

The truck, driven at high speed by 33-year-old construction foreman Apadcharawut Noonsed, damaged 11 cars and numerous motorbikes parked in front of the restaurant. It also toppled a spirit house before finally coming to rest against a concrete support near the cashier’s station at the establishment.

Among the eight people injured at the scene were several of the 13 Burmese workers riding in the back of the pickup at the time. At least two suffered broken legs.

The injured were rushed to Mission Hospital and Vachira Phuket Hospital for treatment.