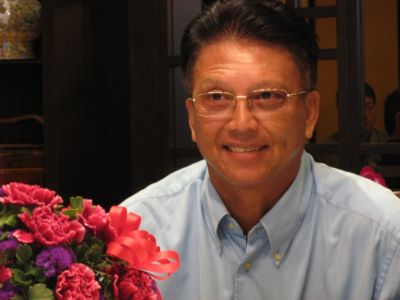 PHUKET: Former Phuket City Mayor Phummisak Hongsyok has been named by the Election Commission (EC) in Bangkok as one of 74 appointed senators who will serve in the 150-member upper house, the EC announced yesterday.

The new Senate will convene after the March 2 election for the other 76 seats. While the elected 76 senators will serve a six-year term, the selected 74 will serve only three years before a new selection takes place, according to the new Constitution.

Many well-wishers stopped by  this morning to congratulate K. Phummisak at the head office of his Anuphas & Son Company on Thepkrasattri Rd.

K. Phummisak is one of eight former members of the National Legislative Assembly (NLA) appointed to the new Senate, which is empowered to remove ministers, appoint and remove members of independent agencies, including the EC and the Constitution Court, and to scrutinize laws passed by the House.

In his capacity as president of the Phuket Real Estate Club, K. Phummisak was one of 15 appointed senators chosen to represent the private sector.

K. Phummisak, 61, thanked the Phuket Chamber of Commerce for nominating him and told reporters he would do his best.

Noting that he served as a member of the NLA’s committee on tourism, he said he would continue to represent the needs of Phuket and the Andaman region tourism industry in the national assembly.

The only other nominee from Phuket was lawyer Sarayuth Mallam, whose name was put before the EC by the Phuket Tourist Association (PTA).

K. Sarayuth, who was not chosen by the seven-member selection panel, is one of five PTA vice-presidents.

When is a Rooney not a Rooney?