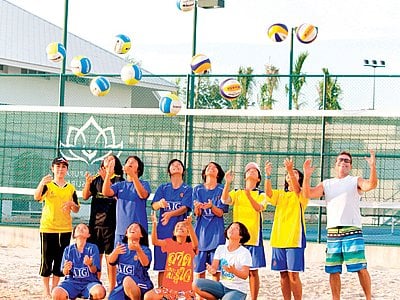 The event will be run over two days, starting on November 5, after the FIVB semi finals, and will finish on Sunday, November 6. The schools final will be held before the final of the FIVB tournament.

Organizer Bob Selznick is helping the students involved with their preparation, and will be holding tournaments throughout the year at Phuket’s Thanyapura Sports and Leisure Club (TSLC).

“The girls are really excited about playing in the PTT Schools Cup. We’ve been fortunate that TSLC finished these courts in time for us to train. The teams all have about 14 girls, but with two world class beach courts available, it’s possible for half the team to practice serving, while the other half can work on their spiking,” Bob said.

Director of Operations for TSLC, Giles Leonard, spoke of his enthusiasm for schools’ usage of the facility.

“Thanyapura Sports and Leisure Club is delighted to offer SOS Children’s Village the opportunity to train on our FIVB standard beach volleyball courts. We have several future bookings from professional teams and it’s great to see the children trying out and enjoying the facilities in advance of the pro teams,” he told the Phuket Gazette.

For more information on the PTT Cup mail to: bbselz@gmail.com