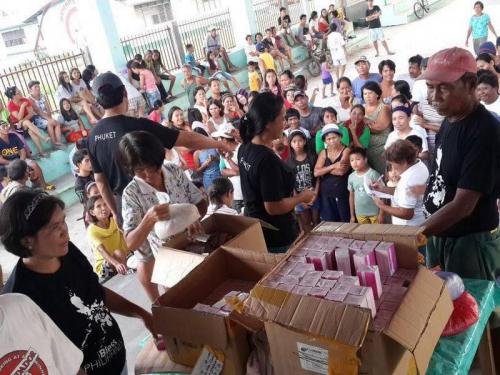 PHUKET: Funds and relief goods collected for victims of Typhoon Haiyan under the iBless Philippines campaign have been sent to the Philippines, and more fund raising events are in the works.

“We sent 139,468 baht and 2,700kg of emergency relief goods to the Philippines on November 29,” Bernardita Sanchez, an iBless committee member, told the Phuket Gazette yesterday.

Some of the iBless members accompanied the shipment, handing over the cash and goods to three organizations – the Kabalikat Civic Communicators Association, Guardians’ Center Foundation, and the Diocesan Social Action Center of the Roman Catholic Diocese of San Jose de Antique.

“We wanted to deliver some of the donations personally, so we went to Iloilo province ourselves,” she explained.

“The people there were happy that we were visiting them. It made them feel that people are continuing to support them,” she said.

“We would like to thank all Phuket locals, tourists and expats who supported us and made donations,” she added.

Ms Sanchez explained that 38,600 baht of the money raised by iBless came from a fund raising event at Saphan Hin on November 17 (story here). The remaining funds came from private donations and from local Filipino musicians who performed in bars and pubs, giving mini-concerts to raise money.

Another iBless fund raising event is schedule for December 29 at Molly Malone’s Irish pub in Patong. Details of the event will be released when available, Ms Sanchez said.