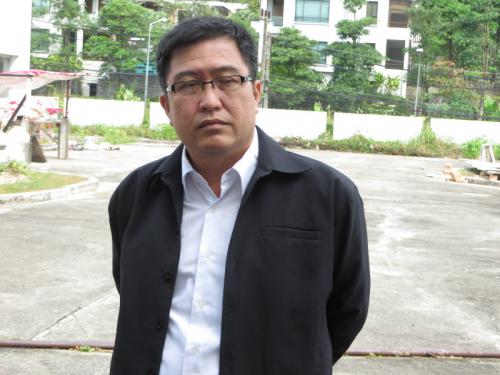 PHUKET: The absent owners of an abandoned resort in the foothills overlooking Patong have been given three months to respond to an order to allow access across their 200-million-baht plot of land – or face a court order to do so.

Phuket Vice Governor Somkiat Sangkhaosutthirak delivered the news yesterday at the site of The Crest resort, on Phra Barami Road, where derelict resort buildings have been left to crumble for at least the past four years.

At the inspection of the five-rai site, local resident Utaiwan Van-Zandt explained to Vice Governor Somkiet that she filed a complaint in 2009 after the resort was built and access to her land was cut off.

“There used to be a road across this plot, but once the resort was built, we could no longer access our land,” she said.

“Now we can’t develop or sell the land, which is worth up to 40 million baht per rai due to its complete view over Patong. If we get approval, I would even pay for a road to be built myself,” Ms Van-Zandt added.

“Over the years, I have contacted many officers. The Kathu District Chief in 2009 said that it wasn’t his responsibility and he asked me to follow up with Patong Municipality,” she explained.

“I hope this time I receive justice through the support of officials,” Ms Van-Zandt said.

Sayan Chanachaiwong, who took up the post as Kathu District Chief on October 28 this year, assured Ms Van-Zandt that this time her grievance would be heard.

“This is my responsibility. You are now talking to the right person,” he said.

“The pathway across the resort land was marked on the Chanote issued by the Land Office to the resort owners. This proves that the pathway was there before the owners built the resort,” Mr Sayan explained.

Though Mr Sayan advised mediation before taking the case to court, it might be impossible, as officials continue to struggle to contact the owners of the company who were building the resort.

“We haven’t forgotten or ignored this case; it’s just been difficult to find the real land owners,” explained Patong Municipality’s Environment Division officer, Sarawut Nimsung. Mr Sarawut was asked to help with the investigation today, as Pornsak Kamiat of the Patong Municipality Town Planning Division was unable to attend.

“On September 7, we issued an order for the resort owners to clear a path for people to have access to land behind the resort. However, we couldn’t establish who the order should be sent to, so we just posted the notice at the entrance of the resort,” he said.

Mr Sarawut explained that Patong Municipality officers were still searching for the owners of Aranya and Charn Co Ltd, which is the registered Thai company based in Bangkok that is building the project.

Mr Sarawut was unable to give details as to why Patong Municipality continues to have difficulty in tracking down Thai nationals who are registered company shareholders.

“Patong Municipality’s legal representative is still trying to find the landowners,” he said.

“This case was filed four years ago; I want to see justice served. Based on our inspection, it is clear that this building is encroaching on a public pathway and making it impossible to develop the valuable land behind it. I promise we will have results in three months,” he declared.

* Chief Administrative Officer (Palad) of the Kathu District Office Sukanda Huangrattanakorn was originally identified as Utaiwan Van-Zandt in the photo gallery. The error is regretted.