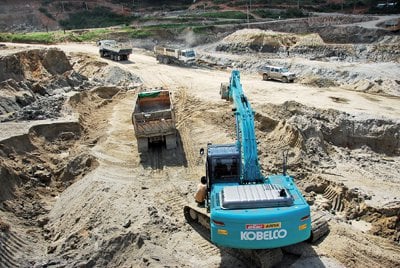 PHUKET: Work on Phuket’s third major reservoir is behind schedule, but officials expect the Klong Krata project in Chalong to be completed on schedule by January next year.

“According to the work schedule we should be near the half way mark, but actual construction is only at 39% due to intermittent rain, which continues to slow the excavation and grouting work now underway,” he said.

“Anyway, we try to work as quickly as possible to complete the project by scheduled completion date and I am sure we will do it in time,” he said.

The project, with a 449-million-baht budget from the Irrigation Department, comprises a earthen and rock dam 23 meters high and 927 meters across, a spillway, control room and other facilities.

Upon completion, the reservoir should be able to store about 4.1 million cubic meters of water. It will also be the first Irrigation Department reservoir in Muang District. Phuket’s two existing large reservoirs are located in Kathu (Bangwad Reservoir) and Thalang (Bang Neaw Dum Reservoir).

The Provincial Water Authority hopes to eventually connect all three supply sources through a network of pipes in order to improve service in the areas under its jurisdiction, a consultant hired by the Phuket Provincial Administration Organization told the Gazette.