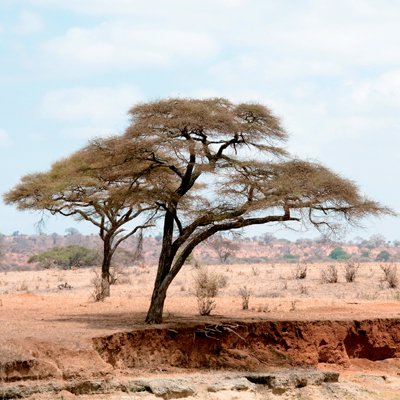 PHUKET: Ask any Australian gardener about the Acacia and they will either look puzzled, or reply: “Aw, you mean a wattle, mate”.

And they should know, because these ornamental trees come mostly from Oz. To confuse things further, the Acacia used to be classified in the genus of Mimosa, and in Mediterranean regions is still referred to by this name. In Thailand it is known as kratin-narong.

It is a huge genus, with over 1200 species of which 900 or so are natives of Australia.”Rare Plants”, a commercial web-site, sells more than fifty varieties.

Most wattles are large shrubs or small trees, so they fit nicely into our current category. But some are definitely not suitable for a Phuket garden, notably “thorn trees” of the African grasslands. Such trees are characterized by flat-topped crowns, and spines so large and sharp they deter even the hungriest browser.

All pretty hardy, acacias are legumes, so they have the knack of producing their own nitrogen by taking it from the air and converting it to soil nitrogen, the most valuable of plant nutrients.

This means that acacias can not only survive in poor conditions, but can help improve soil quality, thus making them useful for restoring vegetation on denuded areas.

Not only are they useful, but they are also ornamental. Most varieties produce spectacular masses of small flowers densely crowded into globular heads, the stamens more conspicuous than the tiny petals.

When on display, they provide a brilliant show of golden yellow blossom. A few have white or cream inflorescences, but the vast majority are indeed golden. Unsurprisingly, they are much in demand among florists.

Most Acacias come from sub-tropical and semi-arid regions, so they require well-drained soil. However, Phuket’s fully exposed sun may be a bit much, so planting in semi-shade is recommended. If you want to cultivate one in a pot, make sure there is sand in the mix.

Where to start? Acacia acinacea, more a shapely shrub than tree, has attractive arching branches, and the familiar, dramatic globular heads of golden flowers. Hence its common reference in Australia, “gold-dust wattle”. Acacia adunca is larger up to twenty feet tall with sweetly scented ball-shaped flowers borne on long sprays. Smaller varieties include Amoena, which has pale yellow blooms on short but dramatic sprays, and the bushy cincinnata. Hickory wattle Buxifolia, or box-leaf wattle, occurs naturally along the eastern Australian coast, and is perhaps the most widely grown of all. Its grey-green foliage consists of many small leaflets.

But the variation in leaf shape throughout the genus is enormous, ranging from feathered to round and crescent shaped. Also varying is range of size from dwarf and prostrate to full-sized trees.

What all wattles do have in common is the capacity to produce bean-like seed pods; it is from these seeds that new saplings are normally propagated.

There are a few things to remember about Acacias. Most of them are fast growing, and in some environments, they have become invasive. Some are whoppers: the black wattle (decurrens) will reach fifty feet, Acacia mangium is bigger. So choose an acacia which will not end up dominating your garden. Unless, of course, you have a palatial acreage.

Wattles do not take kindly to hard pruning, since this causes gum exudation, and opens the way for insect and fungal attack. Leaf fall is more-or-less continuous. And bear in mind that these are shrubs and trees from dry environments. Over-watering is not something they appreciate. After all, like the rest of us, they will have to cope with the rainy season.