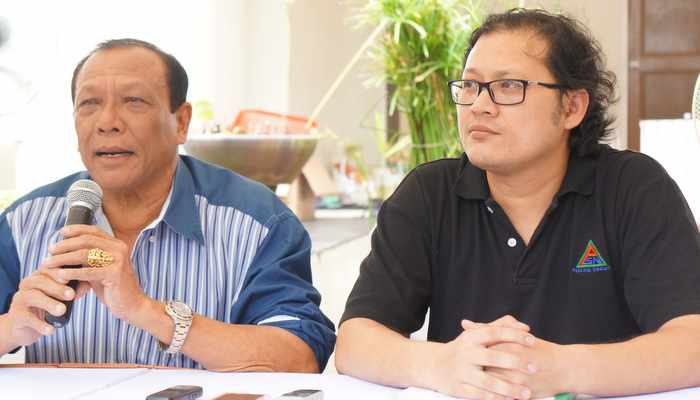 PHUKET: Former Patong Mayor Pian Keesin today said that the police had betrayed him in an attempt to discredit his political career and his years of service to Patong.

“I accept that the police are just doing their job, but I have no idea what the mafia charges are about. All those years I was a leader in Patong, I gave to the community,” Mr Pian said during a press conference organized at his home.

At Mr Pian’s side were his two sons Pattawee Keesin and Preechavude “Prab” Keesin, who, like their father, are facing charges of extortion and criminal activities carried out by a criminal association.

“You can see with your own eyes that Patong has changed for the better, including Patong’s schooling system. I have been pushing for the Patong Saftey Zone, as it is the best way to connect people with officials for the betterment of the entire community,” the 70-year-old Patong native said.

“I am a business man. All the money I have is from my business – I am not extorting money from anyone.”

Mr Pian and his lawyer, Nitut Prasertnatikul, believe that the charges are politically motivated.

“My work has mostly been as a politician. If anyone wants to bring me down, it has to do with Patong politics,” said Mr Pian.

“It was all the same stuff. Police were asking me about when I got the yellow card from the previous Patong mayoral election (story here). I have no idea how it connects me to the charges I’m currently facing.”

Though Mr Pian said that he could reveal little about the case, as it is now under investigation, he did note that officers had not asked the Keesins to name government officials or police officers that might be involved in corruption on the island.

Mr Prab concurred with his father.

“I wonder why they call me mafia? Why has this ‘mafia’ been helping the community for so many years? I have joined almost every community campaign to make Patong better.

“I am sad that I have been betrayed by the officers, who are acting like all that I have done for Patong means nothing.

“I think that they already know who is involved in the corruption on the island. I’m not going to say who it is, but if they want to take down corrupt people, they know who to go after,” Mr Prab said.

The family did confirm that they will fight the charges.

“We would like to thank the police for allowing us out on bail, so that we can fight these charges and prove that we are innocent,” Mr Pian said. “I am confident the evidence is in our favor.”

Mr Nitat noted that he had necessary documentation to prove that all the Keesin family assets had been accumulated legally.

Mr Pian is the company chairman for the Pisona Group, which has holdings valued at more than 1 billion baht and was raided this morning (story here).