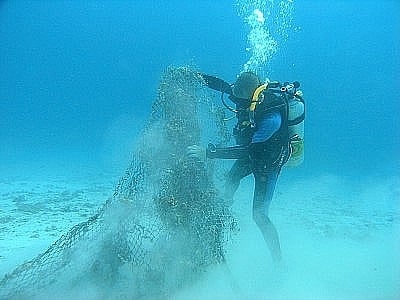 PHUKET: The 502 participants who took part in today’s Go Eco Phuket, PADI and Project AWARE-sponsored “Dive Against Debris” can now proudly lay claim to staging the biggest reef cleanup of any kind in the world.

“It’s a record. Obviously we are very pleased with the event. There were hundreds of divers today, together removing more than 15 tons of debris from the reefs around Phuket,” said Tony Andrews, Thailand’s West coast PADI Regional Manager and Project AWARE Ambassador.

The united effort, bringing together support from dive operators, local resorts and tourism-dependent businesses, government agencies and even the Royal Thai Navy was graced today by the collective efforts of the Royal Thai Navy and a local fishing boat to recover a discarded fishing net weighing 4.5 tons.

Clear weather smiled upon the divers taking part and all have returned safely to Phuket to celebrate their record victory over trash-dumping in the sea.

The cleanup was sponsored by the Phuket Gazette and will be televised daily next week on UBC/True Visions (channel 99) in the Gazette‘s regular weekly ‘Phuket Today’ show. For broadcast times, see this month’s True Visions programming guide.