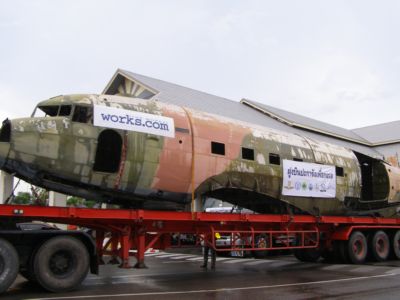 Rainer Gottwald, head of the Thai Dive Association (TDA) technical committee, said TDA divers visited the site on Wednesday and were only able to find one of the 10 aircraft that formed the artificial reef.

Failure to follow instructions by some members of the team who chained the aircraft to large concrete blocks, and subsequent damage by trawlers,may also have played a role, he said.

The destruction of the site was ‘very upsetting’, given all the work and expense put into the project by the TDA and the numerous other agencies and organizations involved, he said.

The project was initiated by the Bangkok-based For Sea Foundation and funded to the tune of 4 million baht by the Cherng Talay Tambon Administration Organization, which hoped the reef would boost tourism in the area.

The project also received a great deal of private-sector sponsorship.

Mr Gottwald said the TDA would have to learn from its mistakes and would probably use train wagons instead of aircraft in future projects.

The TDA divers were only able to find one Dakota during the dive on Wednesday, which followed a series of heavy storms, he said.

TDA divers will survey the area to try and learn more about the fate of the aircraft when sea conditions improve, he said.

Mr Gottwald said he did not think currents would carry the aircraft to the shore, because if that were going to happen it probably would have done so already.

The missing aircraft were probably buried beneath the sand, he said.

Racha Reef to be expanded off Phuket