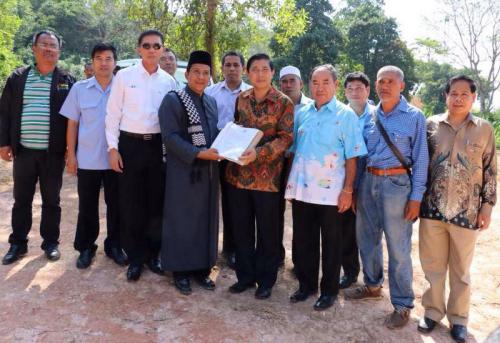 PHUKET: Land within a forest reserve was approved this week for the construction of the 250-million-baht Phuket provincial mosque complex in Thalang.

On January 15, Phuket Governor Maitri Inthusut signed off on the use of over nine rai of the Pa Bang Khanun Forest Reserve near the Thalang Technical College.

“Our budget was approved by Cabinet last year, and we would like to build the mosque in honor of the 84th birthday of HM King Bhumibol Adulyadej,” Phuket Islamic Committee President Komon Doomluck told the Phuket Gazette.

The site will be home to four buildings: a grand mosque, a Halal exhibition hall, a grand hall that can fit up to 2,000 people and accommodations for those travelling to Mecca for the Hajj.

“The accommodations are necessary because it will be more comfortable for us to wait at the mosque than at the airport,” Mr Komon noted.

As soon as the Islamic Committee receives the approved budget, the first phase of construction will begin with the 150-million-baht provincial mosque. The second phase of the project will see the other structures built for 100 million baht.

“The mosque is meant to serve Muslims in Phuket and the surrounding provinces. It will be especially important for them before departures to Mecca,” Mr Komon said.