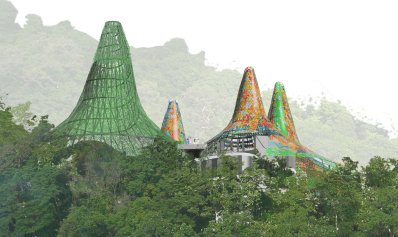 BANGKOK: A design by Naga Concepts of Phuket in collaboration with Disc-O of Spain, and entitled “Mountains of Remembrance”, will be used in building the tsunami memorial at Haad Lek in Lamru National Park in Phang Nga, caretaker Deputy Prime Minister Suwat Liptapanlop announced today.

The Spanish team of architects – Ana Somoza, Juana Canet, Disc-o Architecture, Eva Sebastian Pena, Angel Martinez Rodriíguez and 10 other members – have described the design as intended to “recreate an artificial piece of nature integrated in the park” with the aim of providing people with a place to “meditate, experience and teach them to live with the force of nature”.

The project is intended to represent “a temple hidden in forest, light, nature and silence”.

Visitors will enter the site through a gate and then a hall that “invites [them] to enter the forest”. A path through the forest, with meeting points and rest areas along the way, will lead to the memorial site and then to the sea.

At the highest point of the site, five towers are to be erected in a cluster: The Memorial Tower (for meditation and reflection), The Museum Tower (including a lookout platform), The Warning Center (for education), The Restaurant and Shop Tower (as a place to rest) and The Amphitheater Tower (for presentations).

The Thai-Spanish design was chosen over entries from four other finalists, from Australia, China, Finland and the US.

The jury made their decision after considering feedback from local people surveyed at Takuapa District Office and from visitors to the Architect ’06 exhibition in Bangkok earlier this month.

Migrant laborer rules “to be relaxed’