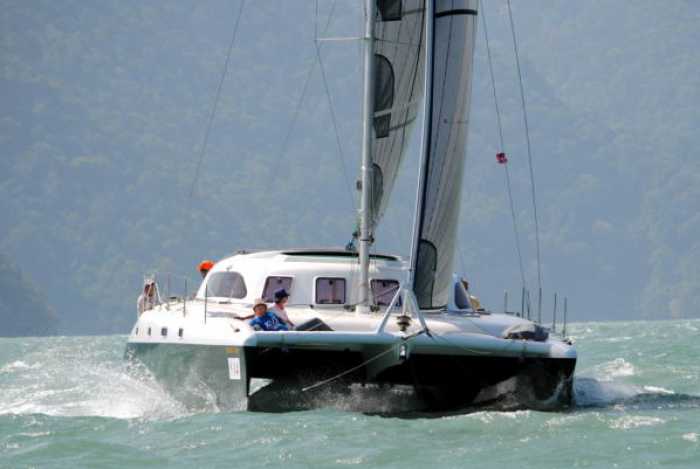 The final placings came down to who was the most consistent and which boats turned up regularly – persistence and commitment count, helped along for the first time this series by a new performance handicap system which was a definite equalizer.

The course was set inside Chalong Bay, and although there was the opportunity to shorten the course at a gate, both divisions comfortably completed the full circuit in fairly consistent winds.

The start was windward to the Baan Nit safe-water mark, then down to a yellow buoy set just off the Rawai Mosque, with a return through the start gate, followed by two sausages (laps) around the Baan Nit mark and the port-channel marker.

The fast trimaran Adrenaline raised her performance with a new screecher – and by not passing out the refreshments until she got up to 10 knots of boat speed. She came in comfortably ahead of the much slower light cruising catamaran Nina, which suffered some unfortunate spinnaker gybe and hoist mishaps.

Hurricane was away competing at the Raja Muda regatta in Malaysia, where she achieved a hard-fought first place – congratulations Alan Carwardine. Galeforce suffered an unfortunate dismasting in windy conditions a few days before the final club race, so was unable to compete – commiserations to skipper Kirill Stashevsky.

With the fleet depleted, Grenville Fordham’s Nina carried on and took the series gold as the most consistent competitor and having completed one more race than Mark Horwood/Merv Owen’s Adrenaline (second place) and Alan Carwardine’s Hurricane (third).

Ging Patinyakorn’s Sansiri Windstar shone in the monohull division with her King’s Cup crew aboard, getting in much-needed practice before the big event.

Mig Wehrie’s Aqua put up her usual solid performance, punching well above her fighting weight and enjoying a cross-tacking duel around the course with Nina.

For those who think yacht racing is gung-ho and only for the experts, think again. The camaraderie during the club’s Sunday series couldn’t be more the opposite (story here).

It makes no difference where you are on the learning curve – you’re one of the group and encouraged to participate and given advice freely to help improve. The new performance handicap system really does mean that anyone can win the series – with true novices having every chance of beating the professionals to the podium.

Children’s sail training was also busy on Sunday, with all the BIC training dinghies and one Laser on the water. For those interested in getting their kids in the program, it won’t break the bank. All the information can be found at www.acyc.asia

For those interested in becoming ACYC members, there are 50% discounts available at the moment for family, individual and junior memberships, with a lot of club benefits. For more information, email club secretary june.carwardine@acyc.asia

Prize-giving night for Series 1 and Series 2 combined will be on November 28. Members and visitors are welcome to attend. There will be a a sumptuous buffet for just 150 baht and drinks are at the usual competitive club prices. Be there by 7pm.