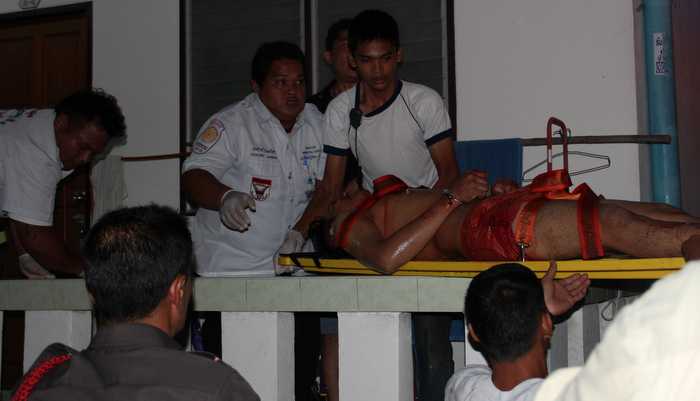 PHUKET: A Phuket man, who in a drug-crazed fit killed his friend, injured his girlfriend and tried to commit suicide, is facing serious charges for the horrific August 14 attack.

Niwat Sampoosri, 25, who later tested positive for ya ice (crystal methamphetamine), is facing charges for murder, assault with a deadly weapon and use of an illegal drug, confirmed Capt Pornthip Chumsri of the Phuket City Police.

“He has been detained at the Phuket City Police Station ever since he was discharged from Vachira Phuket Hospital, which was a few days after his attack.”

Although he was moved to the courthouse jail, the court has yet to set a date for Mr Niwat’s trial, confirmed Capt Pornthip.

On the night of the attack, police found Mr Niwat locked inside his dormitory on Santisuk Soi Mai Luan Road at about 6:30pm, covered in blood and attempting to kill himself (story here).

When police arrived on the scene, Mr Niwat had already attacked his 22-year-old girlfriend Rarinya Putthawong with a meat cleaver, Capt Pornthip told the Phuket Gazette on August 15. He then turned the meat cleaver on his friend, Chalermpol Pasurawiroj, 25, who was trying to help Ms Rarinya.

Both Ms Rarinya and Mr Chalermpol were rushed Vachira Phuket Hospital after escaping from the room, but Mr Chalermpol, who suffered deep lacerations to his chest, was pronounced dead on arrival.