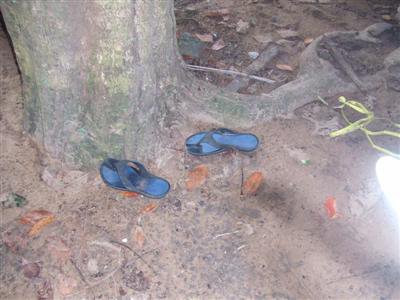 PHUKET: In the second suicide by hanging in Phuket in three days, the body of a local woman was found suspended by the neck from a tree near her home in Thalang this morning.

Tah Chat Chai Police were notified of a suicide on Soi Nai Yang 3, opposite Wat Nai Yang in Sakoo, at about dawn today.

When they arrived with rescue workers they found neighbors staring up at the body of 54-year-old Jindaporn Jampathong, hanging by the neck with a nylon cord fixed to the branch of a large kraton (Sandoricum) tree.

Her body, feet suspended about one meter off the ground, was retrieved by Kusoldharm Rescue Foundation workers and sent to the Thalang Hospital morgue.

Initial questioning of neighbors indicated that Mrs Jindaporn was under stress because one of her sons had a serious medical condition that required frequent trips to Bangkok for expensive medical treatment.

There were no signs of foul play reported at the scene.