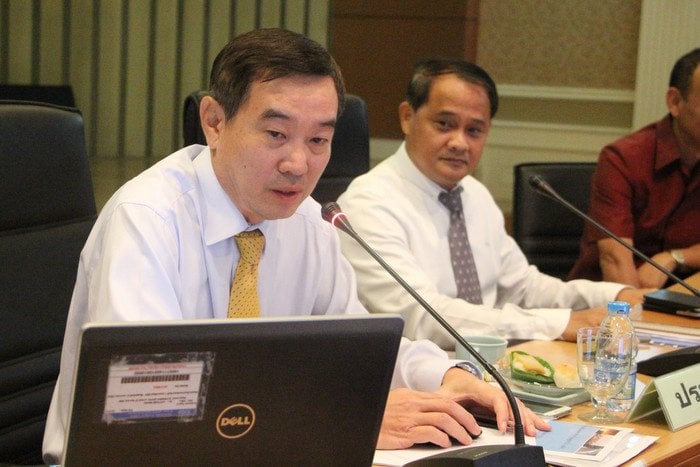 PHUKET: The Electricity Generating Authority of Thailand (EGAT) has changed its plan to run a 500-kilovolt power-line through Thalang after local villagers filed a complaint about the project last month.

EGAT decided to use one of the suggestions put forth by the protestors in their first complaint (story here) and install the new 500KV line along the same path as the current 115KV line, rather than expropriating land to install the line elsewhere, it was revealed at a public hearing on Thursday at Phuket Provincial Hall.

“We looked back on our plans after we read the complaint from locals and did more studies, and now we can see the true effect the project would have on local life,” said Wichai Simadhamnand, assistant governor of the transmission system construction section of EGAT. “We appreciated all the suggestions from the villagers.

“After some reconsideration, we decided to heed the locals’ requests to build the new high-voltage power line along the same path as the 115KV one – a safe distance away. We expect to complete this project in 2019,” said Mr Wichai.

Locals argued in their complaint last month that, as Phuket is a tourist destination and land prices are already high, the land expropriation and subsequent construction of new power lines would cost villagers a great deal, as well as destroy the beautiful scenery of Phuket.

Mr Wichai touched on these statements in the hearing on Thursday, also noting that, as a tourist province, Phuket consumes a considerable amount of energy and is in need of more electricity to prevent blackouts.

“On average, Phuket consumes about 392 megawatts per year, and we expect consumption to increase to 420MW next year,” he explained.

“Now, Phuket receives electricity from Phang Nga on two lines: one 230KV line and one 115KV line. Together, they have the capacity to receive 455MW of electricity.

“Higher capacity is needed here as the island continues to develop.”

“The local residents have asked us to look into other options such as underground lines and underwater lines,” said Mr Wichai.

“We understand their concerns and will consider these options for future projects.”