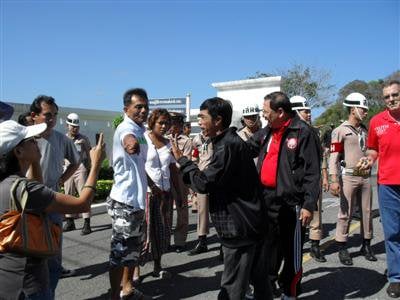 WICHIT, PHUKET: Villagers burned flags belonging to a band of red shirts who attempted to rally in front of the Thai naval base in Cape Panwa this morning, warning them: ‘You are not welcome here’.

A local man told the Gazette, “I don’t think they’ll come back, but if they do, we’re ready for a fight.”

At around 9:30am a band of some 10 red-shirted members of the United Front for Democracy Against Dictatorship (UDD) gathered in front of the naval base intending to read a statement requesting support for their movement from the Royal Thai Navy.

The UDD supporters included a red-shirted foreigner accompanying his wife among their number.

Around 30 local villagers blocked the camp entrance, scuffling with the red shirts and letting them know in no uncertain terms that their presence was unwelcome.

“We don’t want to see any red shirts in our community. We live here in our village in peace,” one man said.

“They should have thought carefully before they did this, because it will affect tourism to Phuket and especially to this area,” he said.

“The navy co-operates with the locals here. We live happily together and have no problems with them,” he added.

Once the red shirts realized they would not be able to read their statement, they left the area in their cars about 30 minutes minutes later.

One villager said yellow-shirted members from the rival People’s Alliance for Democracy (PAD) would not get a free pass either.

“We’d have to consider the reason for them rallying first. If it would lead to damage to the community or give the area a bad reputation, we wouldn’t permit it,” he said.

The small UDD movement in Phuket has encountered problems in the past finding a platform from which to stage rallies on the island, despite their promises to keep them peaceful.

While the locally powerful PAD held a huge rally at the public park at Saphan Hin in April and closed down the Phuket International Airport for two days in late August 2008, the red shirts have found their own requests to rally far less well received.

Just after the Saphan Hin rally, Rajabhat Phuket University reversed a decision to allow UDD members to hold a seminar there, even after all the travel arrangements had been made.

The university, which previously hosted several PAD events on campus, backed down to student protests and said it will no longer allow any political parties to conduct activities on school grounds.