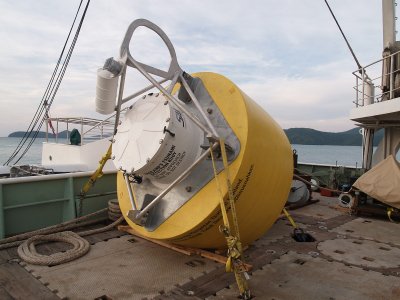 PHUKET: After being adrift nearly a month and a half, Thailand’s tsunami direct detection buoy was discovered by Royal Thai Navy warship Bang Pakong 456 at about 6:30 this morning.

Commander of the Third Naval Area Command, Vice-Admiral Chumnum Ajwong, will chair a press conference at the Phang Nga naval base at 8am tomorrow, when the buoy is scheduled to arrive.

Indian navy vessels initially notified the Thai Ministry of Information and Communications Technology that the tsunami detection device had gone adrift June 3, while the US government’s National Data Buoy System web page on June 4 listed it as adrift and no longer providing data.