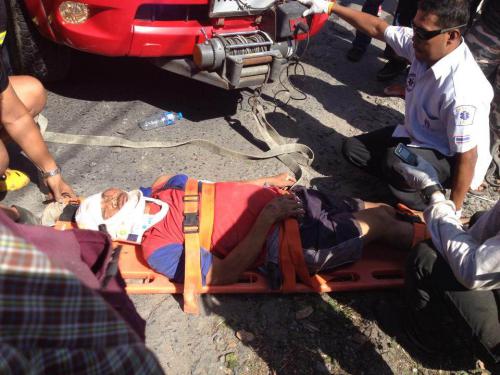 The six-wheeled truck rolled down the steep slope, spilling its load of cement bags as it tumbled. It came to rest after bumping into the front of the vacant house.

“We arrived at about 1:45pm to discover that the truck had burst through a steel guardrail and was resting on its side about 70 meters downhill,” said Lt Kraisorn Boonprasop of the Chalong Police.

The truck, registered to Supamas Khehaphan Limited Partnership, was en route from Rawai to a construction site in Karon when the accident occurred.

“The driver said he missed changing gears while climbing the hill, which led to the truck rolling backward and off the road,” Lt Kraisorn explained.

Police declined to name the driver.

“He sustained minor injuries and was taken to Provincial Hospital in Phuket Town,” Lt Kraisorn said.

“The driver was charged with reckless driving. We have yet to assess the cost of the damage to the house,” he added.