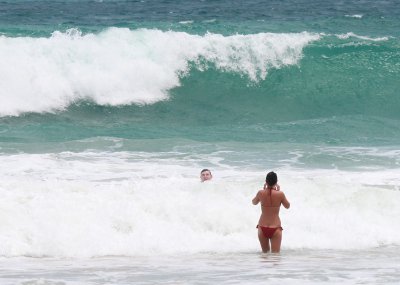 PHUKET: Beach vendors have expressed their fears that it is only a matter of time before someone drowns at Phuket’s popular Nai Harn Beach, as distressed tourists are seen daily in the strong surf.

“Since April, Thais and foreigners who regularly hang out at Nai Harn Beach, such as surfers, have often had to go out and save people who are in trouble and waving their arms for help,” beach vendor Song “Dui” Sa-ingtong told the Phuket Gazette.

“It’s lucky that no one has drowned yet. The surfers are always going out to rescue someone,” he added.

Compounding the issue of dangerous riptides on the beach is the lack of the red “no swimming” warning flags, as well as the lack of lifeguards to tell tourists where it is not safe to swim.

“Many of them [tourists] need to save themselves. I always see people sitting on the beach and looking exhausted after they get out of the water. Many of them have told me that they nearly drowned,” he said.

The swimmers in danger were mostly Thais from the other provinces and foreigners not heeding any warnings about the dangerous rip currents, Mr Song said.

“We need beach guards on duty as soon as possible, before someone drowns. It’s low season now and there are rip currents every day,” he said.

There are currently no lifeguards on duty at Nai Harn – or any of Phuket’s main tourist beaches – as the Phuket Provincial Administration Organization (OrBorJor) struggled for months to find any organization willing to provide the life-saving service.

The Phuket Lifeguard Club initially declined to renew their contract with the OrBorJor to provide the service, as they claimed the thankless job paid little and offered very little in providing the equipment needed or any professional development to keep lifeguards on the beaches.

However, Phuket Lifeguard Club President Prathaiyut “Nut” Chuayuan confirmed to the Gazette earlier this week that the club has now submitted an application to provide lifeguard services.

“I agreed to sign the new contract with the OrBorJor because nobody else wants to do it. This is hard work with no profit,” Mr Prathaiyut said.

Mr Prathaiyut said the earliest his lifeguards could return to patrol the beaches was Monday.

In the meantime, Mr Song and his fellow beach folk will have to keep their fingers crossed, and their eyes open, so that the coming days do not end with a drowning.

“I’ve called the OrBorJor a few times to ask them to put lifeguards on the beach. A few of them have come, but only on the days I called,” Mr Song said.