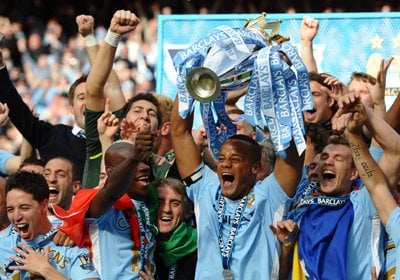 PHUKET: This season’s Premier League has been one of, if not the most exciting seasons in recent memory. Not since the title decider between Arsenal and Liverpool in 1989 has a season ended with so much drama.

The battle between the two Manchester clubs for supremacy was of course the highlight of the show, with both sides stretching out eight point leads only to throw them away. Finally only goal difference separated the two sides.

At the other end of the table it was equally enthralling. Wolves were garbage, and sadly so as they looked a decent side under Mick McCarthy, but the ever recurring merry go round that is a football manager’s life rotated too soon for the men in orange to stay up.

Wigan’s resurgence was something to behold and one can only hope that Roberto Martinez takes charge of a side with a bit more to spend than the Latics can afford as he is certainly a manger with a lot of promise.

Off the field circumstances also played a major role in the on-going drama that is the Premier League.

The traveling circus that is Manchester City did not fail to entertain on and off the pitch with Mario Balotelli’s inability to live on the same planet as the rest of us constantly provided entertainment that only soap opera writers could make up.

Not to be outdone, Carlos Tevez tried his best to relegate Balotelli as the second most difficult man to manage at the club with his 3 month golf tour of his native Argentina.

On a more serious note the unexpected heart failure of Fabrice Muamba on the pitch put the game into perspective. It is after all just a game, a point everyone involved, including fans, sometimes forget. The way the situation was handled by everyone in the league was commendable.

I have picked out six things that stood out for me in the season, three positive and three, not so much.

Positives
Return of Newcastle and the rise of the new boys
Newcastle United is a big club. They are well supported, have a magnificent stadium (despite its new name) and have a proud history. It is a club that belongs at the top of the table, fighting for trophies and winning games.

The form of the promoted clubs has been remarkable, particularly from Swansea and Norwich. Leon Britton has emerged as one the best passing talents in the country and the positive nature that both sides play will ensure that neither will roll over in the coming seasons

Wigan and Arsenal turning things around
Both managers at opposite ends of the table swear by their particular brands of football that their clubs play, but there have been times throughout the season that both received criticism for favoring an aesthetic approach as opposed to a winning one. However, both turned it around in remarkable fashion. Both clubs will take their positions gladly given where they were but if end of season form is anything to go by, both will be expecting more in the coming years.

However, United’s losses to Wigan and Newcastle and their draw with Everton cost them dearly. When City then beat United 1-0 at Eastlands the momentum had swung again. The final day’s drama will forever be remembered and will become a reference point in the future, but the season as a whole should not be forgotten for its drama.

Negatives
Spurs failing
Fourth place in what has been billed the most competitive in the world is hardly a cause for concern, especially if that side in question has not won a league title since 1961. However given the promise that this season held for Spurs, Harry Redknapp will be disappointed, doubly so if Chelsea win the Champions League and kick Spurs out of the competition next year.

Sacking of managers
This has been a problem for some time now, not just in England and not just this season. Aston Villa, Wolves, Blackburn and Chelsea can all look at their positions in league and place some of the blame on their treatment of the men in charge. In Chelsea and Blackburn’s case the problems started before the opening of the season.

In sport consistency breeds success and no manager, no matter how talented can be successful if not given enough time.

It’s just not football
From Joey Barton to Mario Balotelli to Carlos Tevez, this season had its fair share of villains. In City’s case both players could have derailed their title challenge but did not. However a title will surely only add some time to what Mancini must realize is a ticking time bomb. Like Barton, both players are immensely talented but with the resources at Mancini’s disposal, they must surely be more trouble than they are worth.

See this week’s edition of the Phuket Gazette for a preview of the games to be played this weekend.

Phuket tourists left to save themselves from dangerous surf