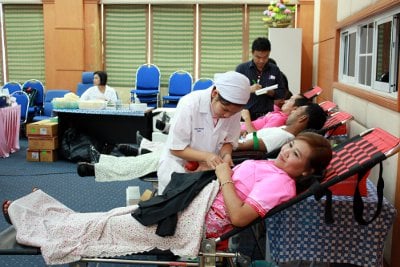 PHUKET: The Phuket Regional Blood Center is calling for blood donations to replenish stocks to counter the annual fall in donations during Phuket’s tourism high season.

Each year from January through April, the volume of blood collected falls short of target levels, says Vichote Buraphachanok of the Blood Center.

“The main reason that we fall short of our target levels during the high season is that hotel staff, who usually make lots of donations, are working hard and don’t get enough sleep to make donations,” Mr Vichote said.

“Many hotels canceled their plans to ask staff to make blood donations in March, so we really need all the support we can get from other qualified donors,” he said.

Donations can be made at the Phuket Regional Blood Center at the following times:

They can also be made at the mobile clinic, which will be at the following locations this month: