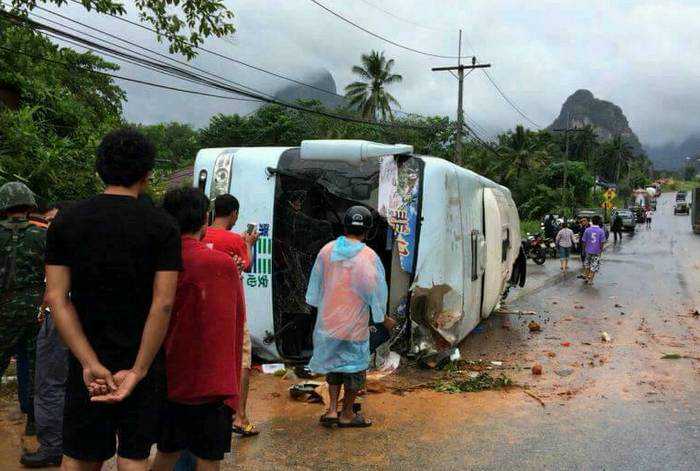 Rescue workers were forced to use the “jaws of life” tool to cut free one of the 11 injured people travelling in the An Xin Tour Phuket bus, explained Lt Col Sanea Ukot of the Phang Nga Police.

“We arrived at the scene with rescue workers and found the bus on its side with things scattered everywhere. Chinese tourists were moaning on the ground and one woman was stuck inside crying in pain – they had to cut her free,” Col Sanea said.

“A total of 13 people were in the 24-seater bus as it took them from Phuket to Bor Saen Villa & Spa Hotel in Phang Nga.”

There were 10 Chinese tourists, one Chinese guide, one Thai tour guide and one Thai driver.

An An Xin Tour Phuket staffer, who declined to reveal her name, told the Gazette this morning that the company would help those injured. However, she was unable to reveal any further details.

Five of the injured were discharged from Phang Nga Hospital, while six were transferred to Bangkok Hospital Phuket, where they remain today.

Hospital staff declined to reveal any details about the extent of the injures to those in their care.