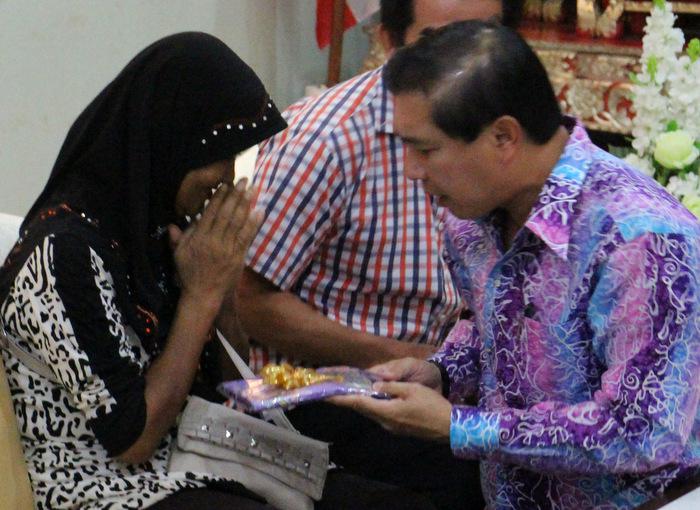 PHUKET: Two of the three teenagers allegedly struck by police officers investigating the rape of a pregnant woman in Phuket last Sunday night have publicly declared that the officers never struck them.

The declaration was made during a public meeting this morning at Provincial Hall in the presence of Phuket Governor Maitri Inthusut.

“Police did not hit or threaten any of us,” one of the teenagers told the press. “They just asked us if there was anything we would like to confess.”

Allegations that four police officers struck the teenagers while searching for the rapists (story here) sparked a blockade of Thepkrasattri Road on Wednesday night. The blockade brought traffic to a standstill for eight hours, creating Phuket’s worst traffic jam on record.

Two of the teenagers were present in front of the press today. The third teenager was represented by his parents, though no reason was given for their child’s inability to attend the conference.

The four officers were present.

However, despite the teens publicly declaring they were never struck, Lt Akarapol offered an apology for the misconduct that apparently never happened.

“Everything we did was in accordance with the law. It might seem rough, but it is how police work,” he said, speaking on behalf of his fellow officers.

“Please accept our apology for anything we did that made you feel uncomfortable.”

Lt Akarapol affirmed that the three teenagers were in no way suspected of being associated with the twin brothers who have since confessed to the rape (story here).

“I would also like to affirm that we did not assault, handcuff or bring those three teenagers to the police station. We saw them at the gas station and just talked with them,” he said.

“After seeing the photo of the gun, they asked to search my house, but they didn’t find anything and they let us go,” he said.

No reason was provided as to why the teenager had a photo of a gun saved in his phone, who owned the gun or where the gun was being kept.

“We must understand each other. Police have to do their best when investigating a case, but they have to be ‘softer’ when questioning people,” he said.

“And people have to understand how police work, because questioning suspects has led police to arresting suspects in many cases.

“Everyone makes mistakes, but the most important thing is forgiveness.”

“Our main purpose for the protest was to see justice for the woman,” he said. “But third parties, people who had been previously arrested by these officers, mixed in with the crowd and called for the four police officers to be removed.”

Mr Wiroj personally attested to working with the officers.

“I have close relations with these four officers, as we have worked together on arresting drug suspects,” he said.

“I understand the reasons for the behavior of all parties involved in this, but I am not sure that most people will come to the same understanding like me.”

“These four guys did great work which led to the arrest of the rape suspects within 30 hours of the incident,” Col Somchai said.

“Instead of getting a reward, they were wrongly accused by residents. Is this fair for police?”

“We must honor our promise to the protesters,” he said. “We have to find replacements for them as soon as possible. Otherwise, I believe there will be a marked increase in crime in the Tah Chat Chai area,” he said.

Phuket faces no lifeguards on beaches as contract debacle ebbs on