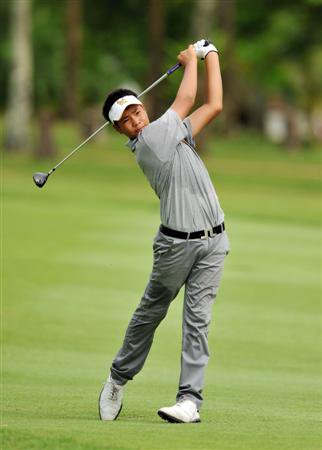 PHUKET: The opening day of the US$60,000 Mercedes-Benz Masters Thailand witnessed some sensational low scoring, with four players taking the lead with course record five-under-par 65s and a 13-year-old amateur upstaging the professionals with a 67.

They lead by a shot over Thailand’s Namchok Tantipokhakul, winner of last year’s Mercedes-Benz Tour Order of Merit list, and Juvic Pagunsan from the Philippines.

Stealing the limelight in the fourth event of the season on the Mercedes-Benz Tour was Phuket teen sensation Pinsawat Pariwat, who unleashed a very impressive 67.

It was no surprise that Wisut’s name appeared on top of the leaderboard; since the season opening event he has been in fine form and in confident mood.

He started on the 10th and made the turn in four-under-par 31. He made his only bogey on the par four fourth hole.

Lam, a former winner on the Asian Tour and Mercedes-Benz Tour, shot a bogey free round.

“That was a solid start. There had been some rain so the course was soft and it was not playing too difficult. It is a strong field this week so you are going to have to play well to win,” said Lam.

Pinsawat, playing in the final pairing, also started on the back and was three under with five to play, raising speculation that he could finish the day in the lead.

Unable to make up ground on the leaders, he is is well placed to make the halfway cut, which is his main aim. The golfing prodigy was a last-minute sponsor invite to the event.

“I wasn’t nervous. I wanted to shoot level par and really did not expect to do so well,” said Pinsawat, who started playing golf at the age of 10 at Phuket Country Club and is already part of the Thailand Amateur squad. He has traveled overseas numerous times to represent his country and will compete in the United States for the first time next month.

Many of the pre-tournament favorites started well.

Jay Bayron from the Philippines, who currently leads the Mercedes-Benz Tour Order of Merit following three successive second place finishes, came in with a 71.

Phuket to feature in relaunch of ‘playground’