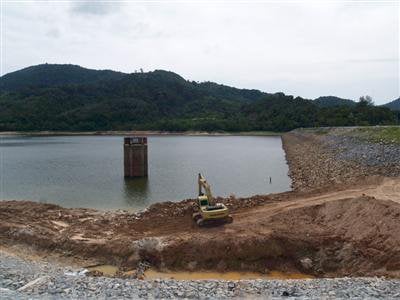 PHUKET: Despite some sporadic heavy rains, parts of Phuket continued to face water shortages throughout May.

Sun Jantarawong, who heads the Phuket Office of Disaster Prevention and Mitigation, said parts of Thalang including Mai Khao, Sakhoo, Pa Khlok and Thepkrasattri continued to suffer from lack of water last month.

“Luckily local administrations had good water management for their people. I think they will be better off now,” he said.

According to Meteorological Department statistics, total rainfall from May 1 to 30 at the Phuket Town monitoring station was down 208.9mm compared to all of May 2009.

For the same period at Phuket Airport, mean monthly rainfall was 291.4mm.

As of yesterday, year-to-date rainfall amounts at the Phuket Town and Phuket Airport stations were 386.4mm and 520.9mm, respectively.

Of the Meteorological Department’s eight monitoring stations along the Andaman Coast, Satun Province has been the rainiest with 735.4mm year-to-date, while the station on Koh Lanta in Krabi has recorded just 186.0mm.

An officer at the Phuket Town monitoring station, who asked to remain anonymous, suggested the ‘El Nino effect’ might be responsible for the late arrival of heavy rains this year.

The current amount is enough to last about one more month without replenishment, he said.

Chalee Sittabut of the Phuket Agricultural Extension Office’s strategy and information section said his agency initially worried that lack of rainfall could negatively impact agriculture, but said that farmers had largely managed to find enough water for their crops from tin mining ponds and other sources.

In a bid to increase storage capacity, work is underway on two small reservoirs in Rassada, one next to the Rajabaht Phuket University campus and the other off Soi Phanieng.