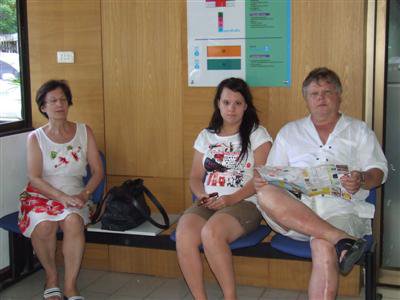 PHUKET: A Phuket taxi driver drove off with a Finnish tourist’s bag while she and her parents were carrying shopping back to their hotel room on Tuesday.

The taxi picked up Sini Kukkonen, 17, Lauri Kukkonen, 61, and Tanja Kannerua, 59, on the bypass road between Central and Big-C around 10pm.

While they were unloading their shopping at the Phuket Island View Hotel in Karon, the driver suddenly slammed the passenger door and drove off.

The taxi driver had already been paid the agreed 450 baht fare before he made his sudden departure.

Sini’s bag, which contained 1,200 baht, an iPod, a mobile phone, glasses and contact lenses, was still on the passenger seat.

“We were running to stop him and we got in a tuk-tuk to chase him, but eventually we lost him,” Sini said.

The taxi was a silver Toyota driven by a Thai man between 30 and 35 years old, Miss Sini said.

The shopping mall is understood to be checking taxi drivers there, as it does not want such a man serving its customers.

Three US navy vessels in Phuket