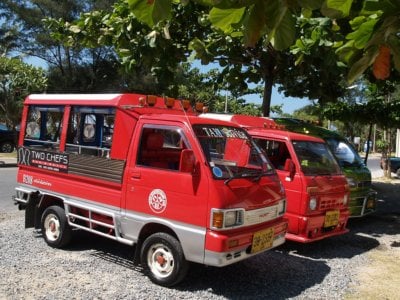 KARON, PHUKET: A group of Phuket taxi operators has demanded a ‘fair share’ of the tourists transported between a Karon hotel and local tour destinations.

The demands follow a complaint from Centara Karon Resort that heated arguments at the hotel between taxi drivers and tour company representatives have scared off tourists and threatened to ‘tarnish Phuket’s image’ as a tourist destination.

The letter highlighted a particularly volatile incident last month in which taxi drivers are alleged to have threatened and verbally abused hotel employees and a tour company representative, causing fear among employees and guests.

Mr Supab said that eight limousine taxis contracted out by the hotel and about 40 other vehicles stationed outside the hotel, including tuk-tuks and mini vans, were losing out on fares.

“We never threaten tourists. We just do what we need to do to survive, but our jobs are being taken away by these tour companies,” he said.

“About 400 tuk-tuk taxis operate in the Kata-Karon area. Tour companies should use the local taxi service, as it is a job reserved for locals, just like massage, jet-ski and beach-umbrella operators,” added Mr Supab.

Another meeting chaired by the Mayor of Karon was held yesterday in an attempt to reach an amicable agreement between the interest groups. Attending that meeting were taxi drivers represented by Mr Supab, Centara Karon Resort and Turismo representatives, and members of the Tourist Police.

At the meeting, Mr Supab requested that Turismo make use of local taxis to transport its customers.

Turismo representatives said they would discuss the issue with company executives and give Mr Supab an answer next Thursday.