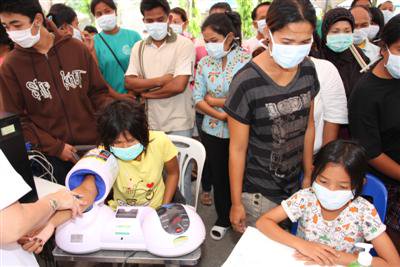 PHUKET CITY: The Department of Disease Control is gearing up for a re-emergence of the A(H1N1) virus that causes swine flu.

Mrs Sirilak Thaijaroern, director of the Department of Disease Control (DDC) Region 11 Office in Nakhon Sri Thammarat, said the number of new cases of A(H1N1) is increasing nationwide with the arrival of the cool season.

To fight the spread of the disease, the DDC will relaunch public awareness campaigns encouraging people to cover their noses and mouths when coughing or sneezing, avoiding high-risk areas and immediately taking time off from work or study if experiencing flu-like symptoms.

The seven upper south provinces accounted for most of these, with 23 deaths from a total of 2,365 cases.

Deaths have been recorded in six of the seven provinces.

There have been two deaths reported in Phuket, both in patients with compromised immune systems.

As before, the MoPH expects its community health volunteers to play a key role in reporting cases of infection and ensuring those who come down with the flu get proper treatment and information about how to prevent the virus from spreading to others.