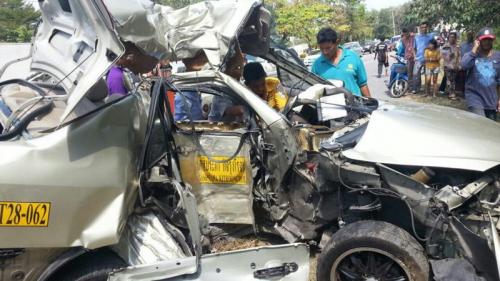 PHUKET: A taxi driver speeding from JW Marriott Phuket Resort & Spa at Mai Khao Beach to pick up a passenger at the airport died after losing control of his car on Thepkrasattri Road early this afternoon.

Witnesses reported that Warongsak Rungsawang, 29, entered one of the sharp curves in Baan Mak Prok at high speed southbound, lost control and hit a power pole.

Capt Santi Prakobpran of the Tah Chat Chai Police was called to the scene at 12:45pm and found Mr Warongsak, bloodied and unconscious, pinned behind the steering wheel of the taxi he was driving, which was registered with the authorities as belonging to Sasiprapa Kitroongrot.

“Mai Khao and Kusoldharm rescue workers spent an hour cutting him out of the car, but he died before he could be freed,” Capt Santi said.