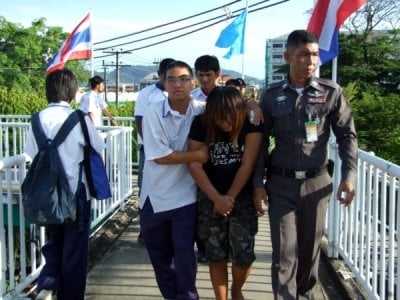 PHUKET: A group of Satree Phuket School students were able to talk a troubled teenager out of committing suicide by jumping off the pedestrian footbridge near their school this morning.

Satree Phuket 12th-grade student Nat Koeypoekaisan said he was walking over the footbridge that spans Thepkrasattri Road when he noticed the young woman climbing over the handrail, facing out over the traffic in tears.

As Nat tried to talk her out of it, the girl explained that she had been abandoned by her mother two days earlier and forced to work at a karaoke bar off Phun Pol Road on the east side of Phuket Town.

She was desperate to get back to her native Roi-et, but had no money, no knowledge of the roads, no friends or acquaintances…and her mother didn’t want her to return home.

She spent two days walking around the streets of Phuket City, at night sleeping in front of the Bank Of Ayudhya branch on Phun Pol Road, she said.

Penniless, she hadn’t eaten in two days and her only sustenance was tap water she drank from the bathroom at the Esso station.

She was earlier picked up by Kusoldharm Foundation workers who took her to Vachira Phuket Hospital for treatment of a bad stomach ache, but after her release her predicament had not changed.

When she reached the Satree Phuket School she decided to end her life by jumping from the footbridge, which is about five meters high.

Nat and his friends consoled the girl and tried to convince her to come down, holding her hand and telling her that every problem has a solution and suicide is never the answer.

During this time she would only allow students to approach her, not police officers who were monitoring the situation nearby.

After 40 minutes she finally relented and came down the stairs accompanied by the students.

The girl, 19, was once again sent to Vachira Phuket Hospital for treatment and – hopefully – a visit by social workers.

Rough seas off Phuket through Thursday