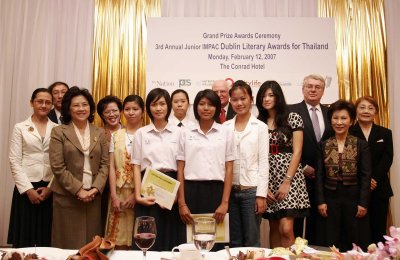 BANGKOK (Nation): Waranya Nawaluck has taken her personal experience from the 2004 tsunami and turned it into opportunity. The 17-year-old Kathu Wittaya School student yesterday was awarded the National 3rd Annual Junior IMPAC Dublin Literary Award for Thailand. The theme for the essay was “A Tale of Thai Grace and Compassion”.

K. Waranya’s essay revolves around the impact that the disaster had. One of the judges, Suchada Nimmanit, said the strength of Waranya’s essay was her choice of words and the simple metaphors she employed.

“These metaphors recreate the vivid pictures of the massive destruction. Despite minor grammatical inaccuracies, Waranya conveys in her writing her memories of the massive destruction of the tsunami, the contrast between the moment of joy and fear, and finally, the compassion and the gracefulness of the Thai and international volunteers who helped with the mental recovery of the survivors,” said K. Suchada.

As the national winner, Waranya will travel to Dublin accompanied by a parent where she will attend the Senior International IMPAC Dublin Literary Awards ceremony.

The grand awards function, which was held at Conrad Bangkok Hotel, attracted more than 150 distinguished guests including educators, academics, students with their parents, authors and other keen promoters of creative writing. The event featured the keynote speech by noted author and poet Khunying Chamnongsri L Rutnin Hanchanlash.

Divided into national and regional categories, this year’s contest was open to Thai students in the Kingdom aged 14 to 18. Entries were essays in English, between 800 and 1,200 words in length.

Presented annually with the goal of promoting excellence in creative writing, the 3rd Annual Junior IMPAC Dublin Literary Awards for Thailand are sponsored by international productivity consultant IMPAC, Enterprise Ireland, The Embassy of Ireland, The Nation, Citylife in Chiang Mai and the Phuket Gazette.