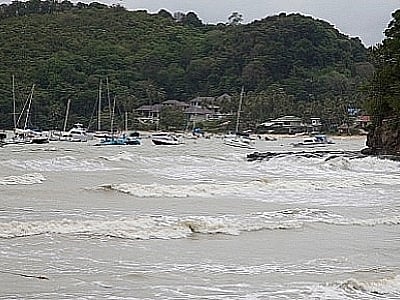 PHUKET: Severe weather conditions in Phuket today broke several boats from their moorings and pushed them ashore at Ao Yon, near Cape Panwa.

Many boat owners were caught unaware by the force of the storm as the bay had long been considered a safe shelter at this time of year.

“Last night, very strong winds challenged the moorings and quite large waves were breaking on the shore, which was very unusual,” said Mike Downard of Sail in Asia Training.

“I believe six boats hit the shore, but one has been taken off already now that the weather has moderated slightly,” he said.

“Two motor cruisers are well dug in by the keel,” Mr Downard said.

“Many people have come down in an attempt to secure moorings, but again it’s very difficult with these waves hitting the beach.

“I haven’t checked tonight’s forecast, but there are many people very concerned that the winds will pick up again later,” he added.