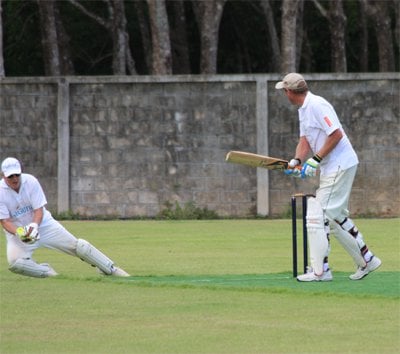 PHUKET: Following Laguna CC’s recent loss, the Island Furniture League season was thrown wide open with the in-form Village Cricket Team holding all the cards going into the last round of matches.

The fourteenth match of this season saw an undefeated Village team up against Laguna at the ACG on Sunday with the latter still licking their wounds from their failure to secure a win against Island CC last month.

While the Village were looking to consolidate their position at the top of the table and guarantee a finals berth, Laguna knew that their season simply hinged on a victory.

In a powerful performance, Laguna posted a 200 plus run target and in response the Village could only post 62 with 9 wickets collapsing for just 21 runs.

Damp conditions from overnight rain encouraged the Village, after winning the toss, to put Laguna into bat which quickly paid dividends. Laguna’s opening batsmen, Michael Ayling (1) and Bill Stahmer (3) were removed early on for a return of only 16 runs and the Village seemed to have the upper hand.

With wickets in hand and a solid base, Laguna pushed the run rate along. Cole and Val Guiraud (15) put on a valuable 41 run partnership from 44 balls, before Guiraud fell in the 33rd over. His dismissal was followed by a 39 run partnership from 35 balls between Cole and Laguna captain Stuart Reading (18) until Reading fell in the 39th over with the score on 180. Cole finished with a flurry to take the score along to 202 runs with the loss of five wickets. Pick of the bowlers for the Village were Paul Stamp (2 for 23), Tom Gordon (2 for 31) and Justin White (1 for 32).

The Village opening bats took to the field with the intention of starting forcefully, but Laguna’s pace attack of Sami Ullah and Guiraud kept the Village pinned down with quick accurate bowling. Martin Foster (2) was clean bowled by Guiraud in the 4th over with the score on seven. In the 6th over, Guiraud slipped during his delivery stride and twisted his ankle which appeared to give the Village respite from the onslaught.

Kevin Quilty (12) and Tim Ross (14) managed to steady the innings with a 34 run partnership before Ross was clean bowled by Khan and from this point the Village batting fell like weakened horses at the Grand National’s Beecher’s Brook. Remarkably, nine wickets for went for only 21 runs with none of the batsmen reaching double figures and the Village’s were awakened from the nightmare in the 22nd over all out for 62 runs.

Inspired bowling from Laguna’s medium pacers Khan and Lijo Hose was supported by an impressive fielding performance with every opportunity snatched up. Pick of bowlers for Laguna were Sameer Khan (4 for 13) and Lijo Hose (4 for 24).

Man of the match was Andrew Cole, with Sameer Khan taking second and Lijo Hose picking up third place.

Having picked up maximum points, Laguna advance to the top of the league table. All seven teams have now played four matches and only four points separate the top four league positions. With two matches remaining, every win is crucial to keep their finals hopes alive.

On Sunday March 11, the Liquid Lounge Lizards take on the Phuket Leopards at the ACG.