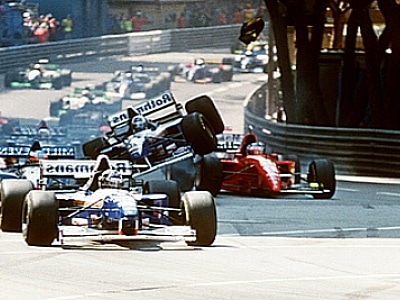 PHUKET: The Monaco GP is one of the most prestigious races in the world, alongside the Indianapolis 500 and Le Mans 24 Hours. These three races form a Triple Crown which only Graham Hill has won. In an irony devised by some god of madness, the Monaco GP and the Indy are to run on the same day this year!

The GP has run under royal patronage for three generations, and the FIA said Monaco contributes “an exceptional location of glamor and prestige” to motor sport. Triple F1 champion Nelson Piquet said “a win here is worth two anywhere else”.

The Monaco GP differs from any other. Notably, the course includes a tunnel where drivers adjust their vision emerging at the fastest point of the track, and then brake hard for the chicane in daylight. The practice is held on a Thursday so the streets can be open on Friday. There is no podium; a section of track is closed after the race to act as parc fermé, where the cars are held for official inspection. The first three drivers walk directly to the Royal Box where the ‘podium’ ceremony is held. The GP has been held on the same circuit since inception. Only the Italian GP, held at Monza for every year except two, has a similarly relationship with a single circuit.

The Monaco GP predates the current World Championship. The principality’s first GP was in 1929; an invitation-only event, won by Man of Mystery “Williams” driving a Bugatti. Williams was William Grover-Williams, who later led the SOE Operation Chestnut supporting French Resistance. He was captured by the NAZIS in 1945, interrogated, interned in Sachsenhausen concentration camp and purportedly executed. But it seems he somehow survived, and lived on under the name Georges Tambal. Another driver who competed in 1929 using a pseudonym was “Georges Philippe”, Baron Philippe de Rothschild.

The 1933 Monaco GP was the first where grid positions were decided by practice time rather than ballot. In 1957, Fangio became the first double winner. Stirling Moss had three victories. Graham Hill won five times in the 1960s and became known as “King of Monaco, and Schumacher eventually equaled that. Senna holds the record, with six, including five consecutive wins.

It is the ultimate test of driving skills in F1, and were it not already an existing GP, it would not be added for safety reasons. Crashes are common, cars have ended up in the harbor, and even run out of fuel in the tunnel. In 1996 Schumacher took pole before crashing on the first lap; Damon Hill led for 40 laps before his engine passed away in the tunnel, and only four cars finished that race.

Returning to today, Felipe Massa is under the most pressure. Have a look at the Ferrari Website, and you will see comments from the Team Principal and Massa. Massa is in his seat for now, but under severe scrutiny. In the most competitive season I remember, with his team mate leading the field, Felipe has scored only two points.

Michael Schumacher’s grumble about Pirelli’s tyres after Bahrain has sparked a glow of dispute. His teammate Nico Rosberg has been extravagant in praise of Pirelli, and Kimi Räikkönen of Lotus has said the tyre degradation is because of high fuel loads in an era of no refueling, and is not about Pirelli. Schumie is starting to look isolated.

Lewis Hamilton has been the most consistent qualifier this year, and should qualify well here, where elevation changes, narrow streets and ‘magnetic walls’ make overtaking very difficult, and qualifying is everything. Hamilton could win if McLaren’s pit team stops destroying him. Räikkönen is due a victory, and be sure that “The Ice Man” will be at his best for Lotus. He is likely to be on the podium.

Williams lost huge amounts of IT and telemetry equipment in the Catalunya fire, and at Monaco will be patching together reserve kit with borrowed McLaren gear. They hope Pastor Maldonado can do it again, but there is a mountain to climb first.

Rosberg will be looking to qualify well for Mercedes, with ‘Schumie’ effectively out of contention with his five place penalty. He is used to controversy. In 2006, he was provisionally holding pole as qualifying was drawing to a close, and stopped his car at the Rascasse hairpin, blocking the track. Other competitors had to slow down, and could not beat his lap time. He was sent to the back of the grid. In the 2010 grand prix, he overtook Fernando Alonso while the “safety car” was deployed. After a lengthy technical discussion, the stewards awarded Schumacher a 20-second penalty, which demoted him out of the points.

In a very nice development for a sport often seen as MCP dominated, Monisha Kaltenborn originally from Uttarakhand is now a one-third owner of the Sauber Team, of which she has been CEO for two years.